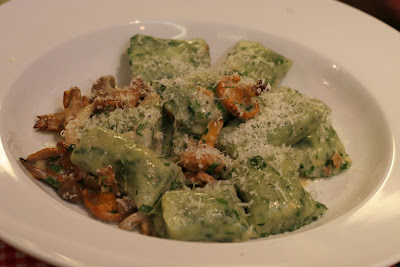 It was J’s birthday this past weekend, and although he was on tour in Japan on the actual day, I wanted to make something special for dinner the day he came home so we could celebrate. I went out and bought two beautiful filet mignon and decided to make some gnocchi as a side dish instead of serving plain ol’ potatoes. When I spied a recipe for spinach gundi (pronounced nu-dee) in a new cookbook I'd just purchased, I decided to ditch the potato version altogether and make these ricotta-based dumplings instead.

Sticky Toffee Pudding (and some other stuff) 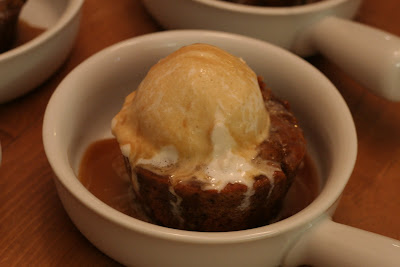 Sticky. Toffee. Pudding. Each word is so appetizing, don’t you think? When you put them together, “sticky toffee pudding” is, in my opinion, quite possibly the most mouth-watering phrase on any dessert menu…and I’m not really a dessert girl. “Sticky toffee pudding” always conjures up sweet, caramelized, ooey-gooey, warm, luscious, moist, decadent, buttery rich goodness and it’s a wonder I’d never had it before I made it the other night for some friends. Strange, isn’t it? Especially since I’d consider myself to be a “brown” dessert type- anything with brown sugar, caramel, toffee, whiskey sauces or maple syrup always grabs me before anything of a chocolate variety. I guess I just don’t see it on menus often and usually find myself staring at some divine version on TV shows like The Best Thing I Ever Ate or Diners, Drive-ins and Dives. Go figure.

Well, I’ve popped my sticky toffee pudding cherry, folks- for both eating and making it! A friend of J’s brought over a bag of honey dates, and although that friend meant to take them home to New Jersey, he left them in our fridge, unfortunately for him, but lucky for ME! You see, dates are the key ingredient in sticky toffee pudding, and eyeing the bag of big, fat, plump dates and having a dinner party scheduled were all the reasons I needed to get baking.

After searching under “sticky toffee” on Tastespotting (thereby getting sucked into all the photos of deliciousness for way longer than I had planned!) and promptly settled on this recipe since it was easy and didn’t include “extras” like crystallized ginger or chocolate. I wanted my first sticky toffee pudding experience to be a pure one- no bells and whistles, please! I baked the puddings in individual ramekins and drizzled the sauce (to which I did add a splash of cognac….hey, booze makes everything better, ok?) onto the still warm cakes and tucked them away until dessert time.

Before we could dig into the sweets, we had to have dinner first. I think it came out well, but there were a couple of things I was unhappy about…. 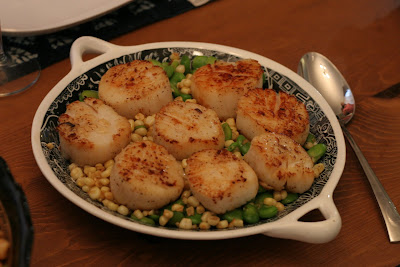 Once again I found myself shucking a bunch of fava beans and asking the veggie gods WHY it’s such a process to get these tiny little green gems onto a plate. I almost always get enticed by fava beans if I see them at the farmer’s market and this time was no different, but after shucking, blanching, cooling and unpeeling them I made a mental note to not do this again for awhile, and since they are no longer in season, I won't be! The corn was sweet and crisp, and the scallops were HUGE and incredibly sweet, but I was bummed that I just didn’t give them enough time and heat to get a really nice crust going. However, they tasted good and were tender so I guess that’s what matters. 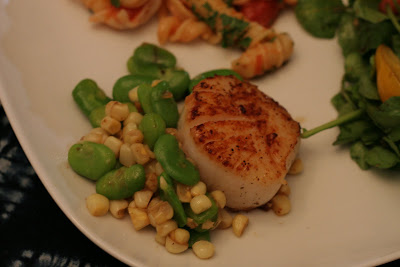 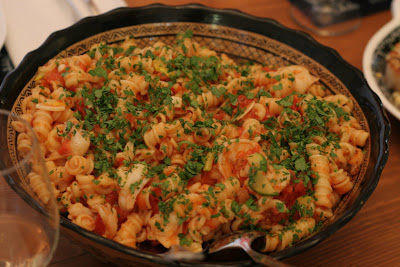 I was super pleased with this sauce- I basically took the gorgeous shrimp out of their shells, then fried the shells in a bit of olive oil slow and low, then added a ton of sweet garlic before straining the oil and adding it to crushed San Marzano tomatoes. It needed only a touch of salt and pepper to round it out. After caramelizing some chopped zucchini and searing the shrimp in more olive oil I just added the sauce to the shrimp, then the cooked pasta to the sauce. Unfortunately I overcooked the pasta a few seconds too long, and although it did retain a bit of a bite, I prefer my pasta super AL DENTE. Again, not a “fail” by any means, but in the future I’ll make sure to time my scallop searing/deglazing/plating and pasta cooking/dressing/plating better. 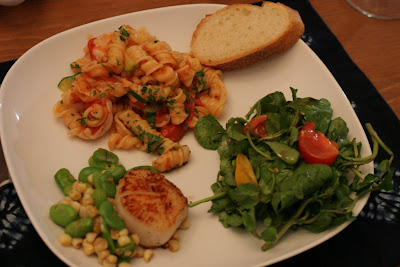 As always, a salad completed our meal (oh, and a baguette, of course!). I don't know about you, but no supper is complete for us without a salad. We eat one every single night, whether we eat in or out. I guess it's for health, but it's mainly because I feel a deep, black hole on my menu if a salad isn't included. 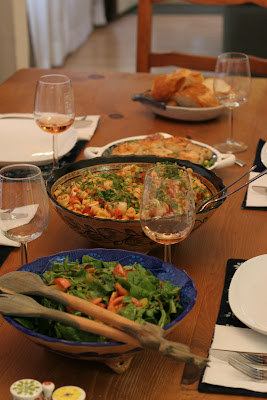 But back to our sticky toffee pudding, which basically erased any memories of overcooked pasta or under-seared scallops (and any health benefits of a green salad)! It was as rich, moist and sweet as I’d imagined and the hint of cognac in the warm sauce combined magically with the melting vanilla bean ice cream to create one, amazing party for our taste buds. You really live up to your name, Sticky Toffee Pudding. 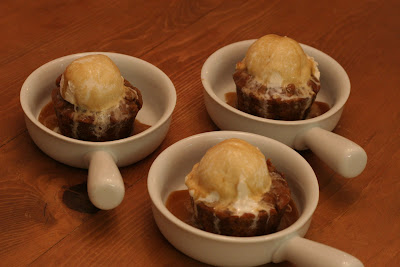 Where have you had the best sticky toffee pudding?