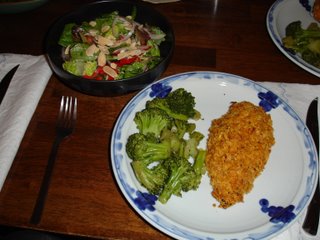 I will be the first to admit that I scowl at recipes which include ingredients like Campbell's Cream of Mushroom Soup or other packaged, processed foods. There's a series of commercials called "Food Bites" that annoys me to no end- "Want an easy dinner? Take a packet of Hidden Valley Ranch Dressing, mix it in with your favorite mayonnaise, spread it on some salmon filets and bake at 325 degrees for 15 minutes. Serve with a side of green beans. A quick and easy dinner your family will love!" 'Scuse me? What family are you talking about coz my family would probably toss that salmon out of the window. I'm all for quick and easy but I'm not about to open a packet of powder, dump it on some meat and call it dinner.

That said, I do use one ingredient from time to time that might sort of be related to the concept of using a canned soup as a sauce. Corn flakes. Yup- regular 'ol Kellogg's Corn Flakes. Although it is pre-made, I can't say that it's exactly the same as the aforementioned Food Bites type of cooking. Where did I first get the idea to use corn flakes as breading? RICK BAYLESS! That's right- he of the Topolobampo Restaurant, multiple cookbooks and James Beard Award Winning fame. Just call him Mr. Gourmet Mexican Cooking. Now don't get the wrong idea- Rick didn't actually give me the idea like, talking to me on the phone or anything (hello?! Do you think I actually know him?). I was flipping through his Mexico: One Plate At A Time when I came across a grouper recipe that sounded scrumptious. And yes- it was coated with crushed CORN FLAKES. I made it for a family dinner and it turned out to be one of my biggest hits ever.

Keeping that recipe in mind, I once again purchased some corn flakes when I got a sudden hankering for some fried chicken. Since I'm on a pseudo-diet until my trip to Japan in two weeks (trust me- being in a sea of little people makes you feel like a behemoth!) I figured that deep fried meat probably shouldn't be on my menu. After all, I have to save the deep-fried-meat-eating for all of the katsu that I plan to consume once I actually get to Japan!! Anyway, I bought some boneless, skinless chicken breasts, marinated them in buttermilk mixed with garlic, and then dredged them in a mixture of corn flakes, salt, pepper, dried basil, cayenne, garlic powder and dried thyme. After placing the chicken on a baking sheet and spraying them with a bit of cooking spray, I baked them for about 15 minutes in a 350 degree oven. 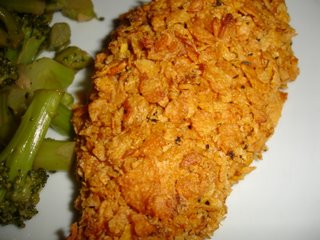 The results? Crunchier than regular fried chicken, it really filled that need for something deep fried. The coating tends to break off a bit if you don't cut your chicken carefully, but the flavor and crunch were really extraordinary and I'd definitely make it again. 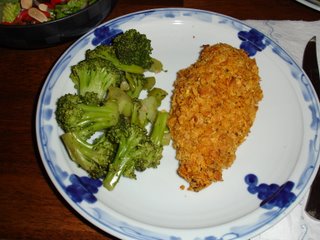 Serve with broccolli for a complete meal!

I'm still allowed to turn my nose up at things like the Creamy Mushroom Soup Chicken Bake right?

That sounds (and looks) yummy. I will confess to a similar vice--instant mashed potato flakes as a crispy coating for fish. I would never actually make "mashed potatos" with them, but they make a fabulous crust!

Hmm.. I would have never thought of using corn flakes for coating material. Thanks for the inspiration, I'm going to try it out and see how it taste!

That corn flake crust looks sooo incredible! I love the buttermilk marinade. I'll give this one a try. Thanks.

God, I love me some cornflake chicken! It looks just wonderful.

You posted this ages ago, but I thought you'd like to know that you can make katsu without deep-frying just like you made it with corn flakes. My roommate in college always did and it turned out fine for her. Just follow the standard katsu recipe - dredge in flower, followed by egg wash(egg + water), and cover with Panko. You're in L.A. so it should be easy for you to find it in your local Vons/Ralphs or go to Little Tokyo!