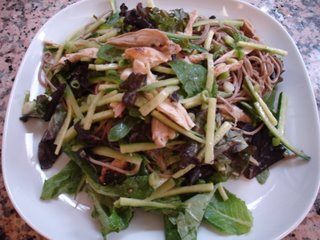 I know- you're probably wondering, "Is this blog called Tuna Salad or Tuna Toast?!?" It's just been so hot lately that my stove has become my enemy. Every night I get home from work, stand in front of the fridge and wonder what I can make that requires little or no cooking. Thus, salad has become my new supper of choice.

When I took stock of the fridge yesterday, I came up with pretty good bounty: fresh, crunchy Japanese cucumbers, a bag of mixed baby greens, scallions and a large Tupperware of leftover chicken, courtesy of my best friend Nikki. She of the small appetite went to a work-related dinner at Pane E Vino and ordered the chicken...which ended up being half of a very large roasted bird. Since Nikki no longer lives in Los Angeles and was just out for a visit, she opted to give us the leftovers instead of trying to take it back on the flight to Nashville....although it probably would have beat out anything that Southwest would have given her for sustenance. Oh wait- airlines don't even give free food anymore! Ack! 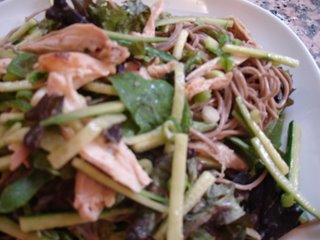 Although a nice green salad with some shredded roast chicken sounded good, I needed something a bit more substantial after a long day of work. I sifted through the pantry and found an unopened packet of soba noodles- score! I absolutely love soba and have used it in many different preparations aside from the traditional zaru soba way. I also love that it only takes about four minutes to get perfectly al dente soba as opposed to the 10 or so that it takes for pasta. After a quick boil, the strained and cooled soba went into a large bowl with the shredded chicken, julienned cukes, diced scallions and mixed greens. Tossed with some sesame dressing, it was a cool and refreshing way to end a hot and muggy day. 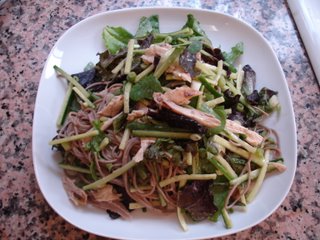 What's your favorite recipe for sesame dressing? I make my own at home since it's fairly straightforward, but for convenience sake (I tend to eat a lot of asian chicken salads at work for lunch) I've been buying a sesame-ginger dressing at Costco that's actually pretty good.

...believe it or not, we in Connecticut have been having quite a heatwave with temperatures hitting 100 yesterday. I have not felt like turning on the oven, too.. So....salad it is. although your salads look much better than mine... Hope it cools off at your end of the world...

ooh that soba noodle salad looks delicious. i should follow after your example and stop using my stove/oven so much. but i can't help it! the heat from cooking is really exhausting though.