But I doubt I will ever get a chance to see J, my other half, dress like this again. Long story short- the airline lost his band's luggage and they had to scramble to buy clothes for a show; he picked up this snazzy suit while shopping and decided to cruise around the festival wearing it, as a joke. Now he's on Vogue's website.

Reminds me of the Laughing Cow cheese commercial..... 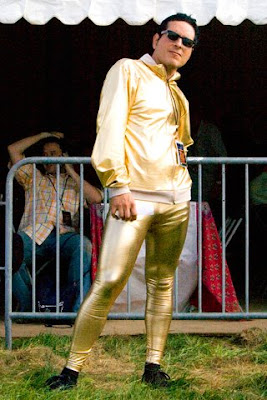 Read about it here: 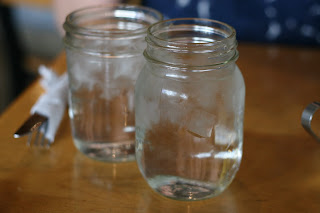 On our way out of San Diego, we really wanted to hit a local spot for a good, filling breakfast. After some serious soul-searching (oops, I mean internet-searching) we decided on Cafe On Park after reading multiple rave reviews of their breakfasts. Although we arrived before 10:00 AM, there was already a wait: 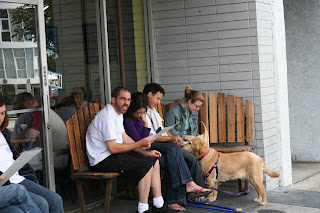 Luckily it didn't take long for my sister and I to be seated. The space was so cute and homey with lots of character sprinkled in, and I immediately got a sense that we'd made the right choice. It just felt like a place where the locals go, and many of the wait staff knew most of the customers by name (cue Cheers theme song here). Something about the place reminded me of Austin, Texas..........maybe it was this fashionably Southwestern-themed couple sitting at the counter: 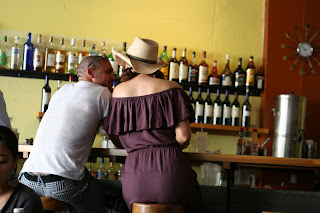 Or the cute arrangement on each table- flower, salt, pepper, Tapatio (essential item): 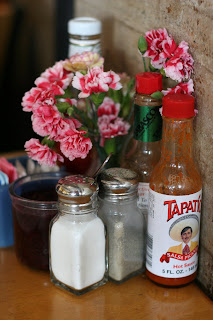 Although I am definitely a savory breakfast person, my cravings were put into sweet mode after spying their list of cornmeal griddlecakes. I'm not even sure why, but the thought of crunchy cornmeal griddlecakes just appealed to me sooo much that I had my mind made up in about 90 seconds. That fact wouldn't be such a big deal, but you don't know my menu-reading/ordering habits. Yes, I'm the one who reads the menu up and down and inside out for about, hmmm....15 minutes, then finally decides on what to order, has a change of heart/regret/guilt/confusion over my original choice and then chases down the waiter to change my order. After 5 minutes, I have a second wave of doubt about the changed order, bemoan the fact that it's too late to change back to my ORIGINAL order, all while driving my dining companions bonkers with my whining, then end up ultimately disappointed with my meal because it isn't as good as what I had initially ordered. Yup- I'm THAT girl. You're annoyed just reading about it, aren't you?

Luckily my choice of Honey & Cornmeal Griddlecake and a side of turkey sausage left me with no sense of doubt, and my sister's order of Savory Corn Pancake with Fresh Jalapenos, Onions & Cheddar Cheese with a side of bacon ensured that I could travel to the savory side of things if I needed to. We both found it odd that an order of griddlecake was just that- one griddlecake- but we just put our faith in Cafe on Park and waited for the goodies to arrive.

And now we know why it's ONE griddlecake: 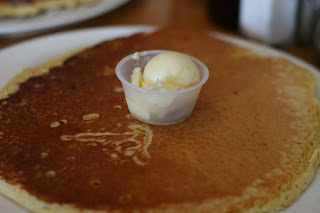 This behemoth griddlecake was bigger than my husband's Oaxacan head, and we were so happy that we fought off the instinct to order more than one each. My sister's had visible squares of cheddar and giant, thick-cut slices of raw jalapeno seared to the top of her griddlecake, while mine was golden brown and pleasantly sweet-smelling. I drizzled some maple syrup over it and the crunchy-yet-tender bite was exactly what I'd been hoping for. YUM! Sis, on the other hand, had to pull out the massive amounts of jalapeno - we both figured the "fresh jalapeno" and cheese would be diced/grated and mixed into the batter which would have made the distribution a bit more even, but that wasn't the case here. I think it was too much of a good thing in bad proportions and made the cake almost indelibly spicy. Too bad- good concept, bad execution. Our bacon and turkey sausages were good, but we were too full of cornmeal griddlecake (we could both only finish half) that we left most of those too. 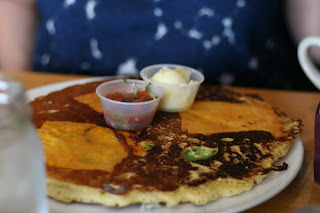 We agreed that we loved the menu and that we'd give it another go if we ever found ourselves in San Diego. I think if you're a pepperhead, you'd love that savory griddlecake, but almost anyone would love the sweet version. 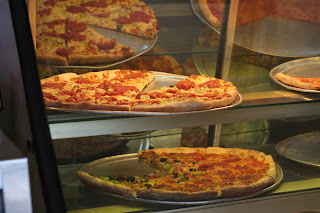 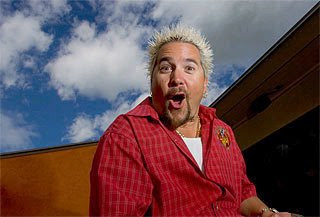 "That's just like jumbotron-mega-cheesy-oozy-woozy-delciousness that would taste good on my slipper!"

I'll admit that host Guy Fieri's "Guy-isms" (that's my word, not theirs) get a little grating at times. His favorites include, "This ain't my first rodeo," and "I've tasted plenty of (fill in the blank) and this rates as some of the best I've had. Seriously." However, the annoying ones are nicely balanced by ones that actually do make me laugh, like "Love, peace and taco grease" and, let's face it, Mr. Fieri is hardly the star of the show. Beautiful close-ups of thick bbq'd ribs, cheeseburgers oozing thousand island dressing and fried belly clams dipped in tartar sauce are the reason why people like me watch it every week. Talk about drool-inducing. Wowza. 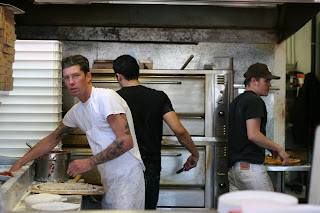 The 'if-you-take-a-picture-of-me-I'll-kill-you' look. Luckily, I survived. 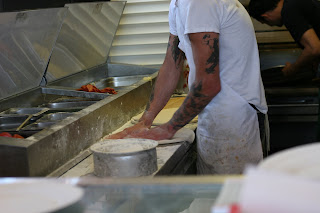 Part of the reason I'm so enamored of the show is because it focuses on foods that only rarely make it into my repertoire. In an alternate universe I could eat piles of onion rings, fried oyster po' boys and duck confit egg rolls on a daily basis and not have a care in the world, but alas, I currently reside in THIS universe and no amount of treadmilling would allow me to eat that way and not gain a few hundred pounds. So I watch, far away from the lovely smells undoubtedly wafting up from the well-seasoned grills and vats of gravy that appear on the show each week, and only dream of actually going to one of the places featured......until now! 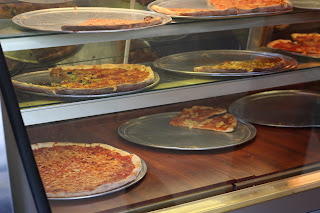 Yes, my sister and I, after many, MANY conversations of one day hitting one of our favorite DDD places, finally had the chance last weekend when we took a short trip to San Diego. We'd seen Pizzeria Luigi on one episode and knew we wanted to try the New York-style, thin-crust pizzas. The fact that Luigi looks like an Italian movie star didn't hurt, either. After spending over three hours on the road, the last hour of it being stuck in traffic, we drove straight there to nosh before checking into our hotel. 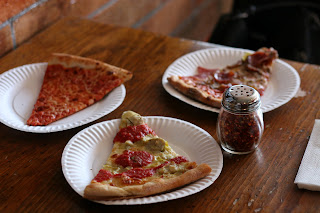 The little shop looked exactly as it did on TV, but alas, Italian Stallion Luigi must have had the day off....*le sigh.* We looked over the pizzas displayed in the window and decided to share three slices- one plain cheese, an artichoke/marinara and an all-meat containing both sausage and pepperoni. The guy behind the counter quickly slid the three slices onto a pan, stuck it in the oven for what seemed like 30 seconds and handed us each slice on a separate plate. We were ready for our first, real-life DDD experience! 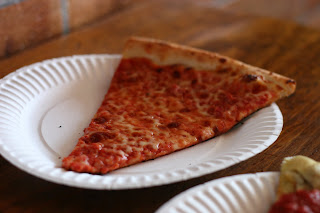 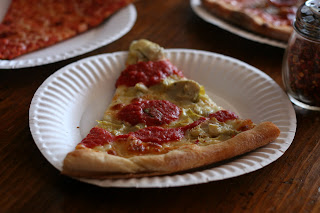 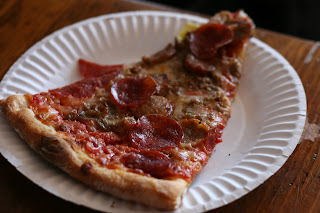 The verdict? To be totally honest, we felt we would have gotten a better representation of the famous pizza had we ordered a whole pie, made to order. Of course that's common sense, but since there were only two of us and we were in town for just two days, it didn't seem very practical. That said, the plain cheese was our hands-down favorite, and the tomato sauce on both that and the artichoke pizza was delicious. The meat slice was just ok- the bottom was warmed but they didn't keep it in the oven long enough to properly heat through the toppings. The crust on all three was crisp in the right places, with a nice chewy texture in the middle and a wonderful, yeasty flavor. Excellent dough, for sure. 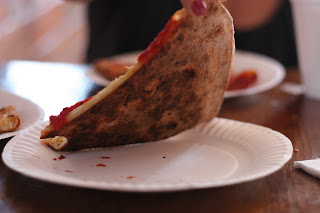 I'm not sure when we'll be back in San Diego, but next time we'll definitely order an entire pizza. We were happy to finally fulfill one DDD dream, and although the list of DDD eateries is a long and storied one, I'm happy to have checked at least one location off my list. On to the next! 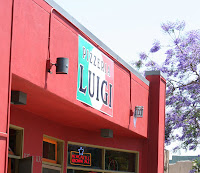