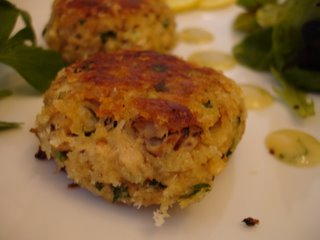 I used to order crab cakes at almost every restaurant until one day I realized that I'd had way too many mushy-with-too-much-filler-not-enough-crab nuggets than anyone should ever eat in a lifetime. My dad's version will always be J and my favorite, but I had never really attempted my own version....until last night.

I hardly ever buy lump crabmeat due to the cost, but on my recent trip to Trader Joe's I spied a big can of Byrd Premium Crabmeat in the refrigerated section that caught my eye. It wasn't the jumbo lump crabmeat that you see at a Gelson's or Whole Foods which come in a tub and hover around $30, but the large blue can did look promising and proclaimed that it was filled with fresh claw meat. When I found out that the one pounder cost $7.99, I was sold, and so was the can of crab......to me, of course;). 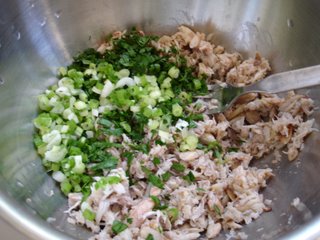 Last week I ended up using half the can to make a crab salad. Toshi, our regular sushi chef at Z Sushi, always makes a crab or tofu salad lightly dressed with the most insane yuzu/soy sauce dressing and I wanted to try and recreate it. I simply took a good quality wafu (Japanese) salad dressing and mixed in some yuzu kosho (yuzu pepper) and it came pretty darn close to Toshi's. Drizzled over a bed of mixed spring greens piled high with crabmeat, it was a beautiful supper! 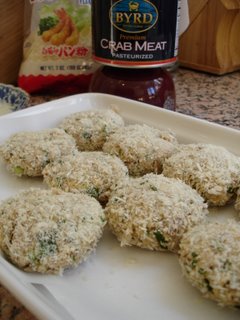 Back to last night. I had a 1/2 pound of crabmeat left so I decided to give crab cakes a go. I just sort of went with flavors that I've enjoyed in crab cakes in the past and they came out really well! I was very pleased since yesterday I was bemoaning the fact that I hadn't really cooked in awhile, and it's always nice to create a recipe of your own that tastes good. I served the crab cakes with a mixed green salad and a quick aioli made by combining some sweet/hot mustard, fresh dill, a splash of champagne vinegar, a spoonful of mayo and a drizzle of olive oil. They came out so well that next time, I'll use the entire can of crab and make a few extra to freeze for a rainy day. 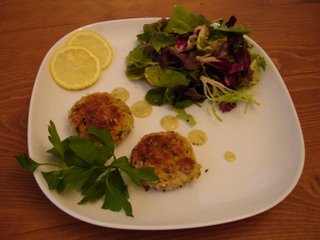 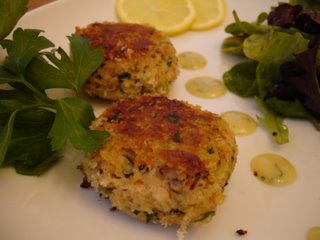 In a large bowl combine crab meat, green onions, parsley and lemon zest- toss together and set aside. Mix remaining ingredients except panko breadcrumbs in a separate bowl and whisk until well combined. Gently fold mustard mixture into crab meat mixture, then add panko breadcrumbs until it's not too dry but not too wet- just moist enough to form patties.

Take 1/4 cup of the crab mixture and gently and lightly form into balls- you don't want to pack the meat tightly. Press down to form a patty, dredge in panko and set on a parchment covered sheet pan or plate. Repeat with remaining mixture, then chill in the refrigerator for at least one hour. (Can be made up to this point a day ahead).

In a large sauté pan, heat 1 TBS of butter with 1 TBS of olive oil and heat until hot but not smoking. Add the crab cakes- being careful not to overcrowd the pan- you will probably have to make these in two or three batches, depending on how large your pan is. Sautee for 3 minutes per side until both sides are golden brown.

Serve with your favorite cocktail sauce or aioli.

first time i've seen your blog and now it won't be the last!

i am a big crabcake nut, too, and adore trader joe's. thanks for giving me a great reason to ad this clawmeat to my new shopping list! :-)

Carlyn: Thanks, as always.

Willa: Welcome, and thank you for your comments. A fellow chowhounder!