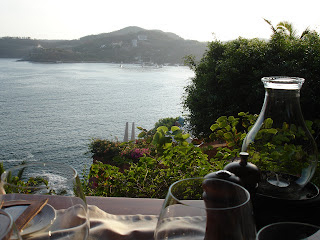 Ah.......Zihuatanejo. I can see why Andy wanted to end up there after escaping from Shawshank Prison and encouraged his friend Red to do the same. I'm so glad they did.

First of all, it's friggin gorgeous. Blue skies, blue water, green palm trees and wonderful people. What's not to like? After three busy days in Mexico City, it was so nice to escape the hustle and bustle of such a big (and polluted- whoa. I'd never, EVER seen such a thick blanket of dark brown smog in my life than when our plane left Mexico City....eek) city.

My second post will be a roundup of all the things we saw and ate, but I do have to devote one post to the best meal we had in Zihuatanejo. La Casa Que Canta is a world-renowned, world-class resort hotel and has been named one the world's BEST hotels numerous times by various travel publications. It was made even more famous by Andy Garcia and Meg Ryan's little vacay in the movie When A Man Loves A Woman. While planning our trip, I toyed with the idea of staying there until I saw that three nights at La Casa cost as much as a brand new Maserati. Well, ok maybe not that much but you get the idea. We ended up staying at the hotel right next door which was honestly just fantastic- we'll be staying there during any future trips to Zihuatanejo (but more on that in the next post!). Anyway, since we didn't stay at La Casa, we figured we'd just eat there. When we asked our concierge to make us a reservation, he mentioned that they have a strict dress code- no flip flops, no shorts, no t-shirts and "casual elegance." Um, what? It's Zihuatanejo, for cryin' out loud! You have to wear SOCKS? We asked another hotel employee and he said the same thing, so we gave up. I mean, I had brought a couple of casual beach dresses I could dress up with some jewelry, but J had nothing but shorts and one pair of jeans, which were also apparently off limits. Oh well.

We started the walk down the hill in search of a place to have dinner and was walking past La Casa when J said, "Let's just go in and see what they say- maybe our hotel guys don't want us to go to the competition!" So we walked in- he in the supposedly-offending shorts and t-shirt get-up, and I in some linen cargo pants and a white tank top. The minute we got inside of the beautiful restaurant, I knew we had to eat there. It was totally empty and the hostess definitely gave J the once over, but she was friendly and sat us immediately. YAY! Maybe because it was the off-season, maybe because J was right about our hotel guys, who knows. At least we were sitting on the edge of the gorgeous patio overlooking the ocean and their famous pool, holding menus in our hands. 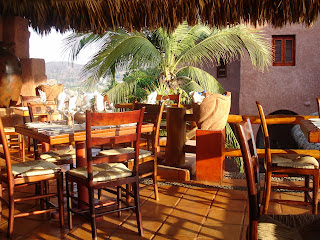 After a quick look, we both decided to get the four-course tasting menu, astonishingly priced at only around $44 per person. Look, I know it's Mexico and a lot of things are cheap, but considering how much the rooms at La Casa cost, I was still surprised. We ordered a bottle of pino grigio and nibbled on the amuse bouche of mini grilled fish skewers drizzled with teriyaki sauce. 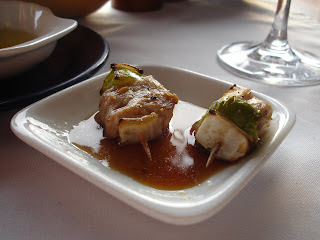 First up: a duo of appetizers. On the left side of the plate was some lovely tuna tartar topped with avocado, and on the left was an interesting take on a Cesar salad. A parmesan cracker "ring" was filled with whole baby romaine heart spears, dressed with Cesar dressing. Both were fresh, light and very delicious and we were thrilled that we actually got two appetizers- this would be a continuing theme throughout the meal so it actually ended up being more like an 8 course menu! 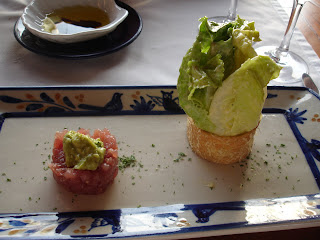 Next came a small blue tangine which contained a single zucchini blossom ravioli swimming in a light cheese sauce- YUM. This was probably our favorite dish of the night. I could have just picked up the bowl and drank the sauce, but I figured that might be rude so I resisted. It was perfect for dipping our bread in though, so we went to town. 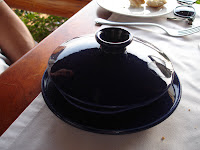 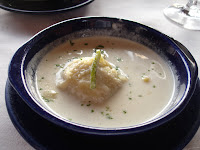 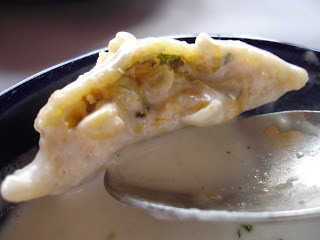 For our main courses, J chose the filet mignon with peppercorn sauce and marlin baked in a banana leaf. Both were cooked perfectly and the peppercorn sauce had a nice bite to it. I have to admit, it was nice to sink my teeth into some meat after living on seafood for the whole trip. My main course of conchinita pibil on one side and grilled lobster tail on the other didn't disappoint either- both were tender and succulent. 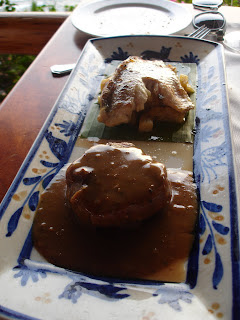 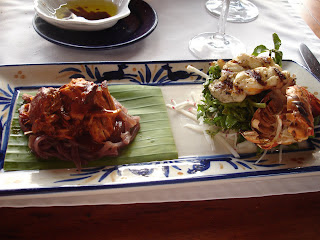 Dessert came in a pair as well- rice pudding topped with raisins and cinnamon and a banana cheesecake. The rice pudding was so refreshing- J hadn't really had rice pudding before that and fell in love with their version. The cheesecake was rich but not too heavy and had a nice, distinctive banana flavor. 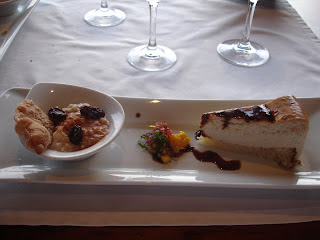 The food, service and amazing views make La Casa Que Canta a must-visit destination, but the value of the meal just cannot be beat! After we finished eating, the staff told us that we could go down to the bar area, sit by the pool and have a drink, which we did. I can see why the hotel is one of the world's best and had to resist not sneaking into one of the bungalows to take a peek! The staff really made us feel at home, even if we weren't guests there. I highly recommend it for nice, sit-down meal to balance out all of the fish-taco eating you'll do if you ever go to Zihuatanejo. 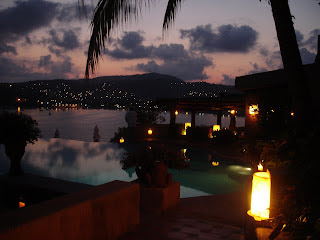 You cannot beat this view!

You have an awesome blog here! As a fellow foodie, I love your reviews of food and restaurants. I haven't travelled to Mexico City or Zihuatanejo, but if I am ever in that part of the world, I now know where to eat.. :)

OMG~ that last picture is sooo beautiful! How romanchikku~~!! I'm so in need of a vacation. Might head to Kyushu in the fall. Just gotta get my fingers in gear and click a few buttons online. I'm so damn lazy.