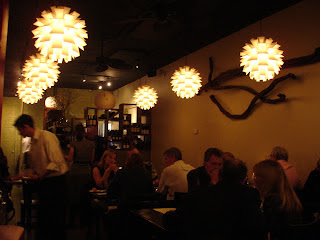 It's been awhile since J and I made our way into Montrose, a charming little community about 10 minutes north of us. Every time we go, we wonder why we don't visit it more often since it really is a cute place....but then we remember that there just doesn't seem to be many good restaurants there. We'd been to Bistro Verdu a couple of times, but one successful outing was followed by a couple of disappointing dinners so we stopped going. Then, a couple of months ago I'd read about Bashan, a new place opened up by a chef who spent some time at Providence in the space that was formerly, well, Bistro Verdu. So we decided to give it a go.

After tasting some wine next door for about 10 minutes, we were called to our table in the nicely decorated space. The menu is still quite small, but we were both in the mood for fish so it wasn't difficult to find something that we wanted. I decided to start with the Burrata and Bresaola Salad with Parsnips, Dates, Endive & Pistachios since it just sounded like such an original combination. J went with the Kaboach Squash Soup with Onion Compote & Squash Tortellini. For mains, I ordered the Seared Barramundi with Jerusalem Artichoke, Cipollni, Chorizo & Shrimp while J opted for the Columbia River Steelhead Trout with Braised Daikon, Garlic Ginger Puree, Bacon & Buna-Shimeji Mushrooms. 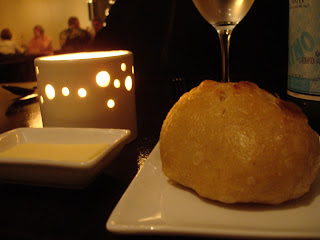 Our waiter gave us each a nice, warm sourdough roll which was perfectly yeasty and chewy. J is nuts about sourdough and fell in love with their version. There's something about warm sourdough and cool, sweet butter, isn't there?! An amuse of olive tapenade and smoked trout arrived, but to be honest I could only taste the olive since the nugget of trout was so miniscule. Our appetizers arrived. J's soup was warm and rich- the sweet onion compote mixed with the smooth kabocha soup made for a great combination. My salad was decomposed into two parts- the burrata sat snuggled in a cradle made by the bresaola on one side of the plate, and the remaining components were tossed together in a salad on the other side of the plate. The burrata/bresaola combo was great- I mean, what's not to like about cured filet and creamy cheese? The salad, on the other hand, was fine but didn't necessarily gel into one great flavor. I like dates, parsnips, endives and pistachios separately but together, it wasn't anything to write home about. I also didn't understand the pairing with the cheese and bresaola. 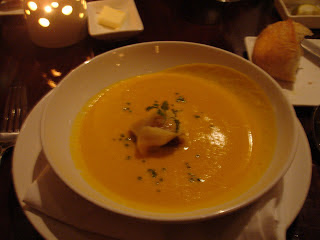 I had better luck with my barramundi which was perfectly cooked- crispy skin and melt-in-your-mouth flesh. All of the accompaniments married well together and I especially loved the cubes of chorizo which complimented the fish well. J's steelhead was also good, but we both agreed that the rectangular cubes of daikon made for a fussy presentation. 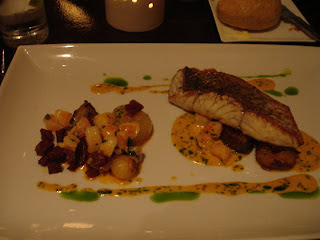 The service was good, space was lovely and the food, overall, was also good, but I think we'll give it some time before returning. The limited menu doesn't lend itself to repeat visits within a short period of time, but the quality of the fish is much higher than anything else you'd find in the area. I'm curious to see what other dishes show up on the menu as the seasons change. You guys were right. The steelhead looks delicious, but really hard to eat.

thanks for the review. we go to rosso often and have been wondering how bashar stood up to bistro verdu. i will have to try it soooooon.

Well your review is much too harsh. Bashan is much, much better than Bistro Verdu. Great ingredients and cooking from a former sous chef from Michaels and Providence. Perhaps the best restaurant Ever in Montrose. The only real question is whether this neighborhood will support it. Better try it again to see if you can get it right.

Weaknesses of World Of Warcraft Gold the client-server model used by World of Warcraft have been wow power levelingexploited in order to crash the cluster of servers that aoc goldmake up a realm. Exploits also include characters being able to instantly Cheapest Wow Goldchange location or teleport. The situationbecame worse cheap wow goldwhen trying to coordinate activities across a number of playersor guilds on the same realm.World of Warcraft Lead Producer, stated that new realms would be introduced to warhammer goldrelieve the burden on existing ones. Existing realms would be upgraded.

Although the game wow gold follows a similar model to others in the genreand was noted for having wow gold cheapmany familiar concepts from roleplaying games, the new approaches gold4powerto reduce pauses between game encounters was well liked. At various times, World of Warcraft players have experienced problems with connecting to and logging in to wow gold for sale the game. Sudden server crashes that would force realms offline also occurred.

Importantly make sure the Nike Air Max are very good vibrates resistancewe.Nike Air Griffey Max 1 with Nike shoe sole for traction technology and physical mobility Nike Free technology.TheNike Air Max 1 is a beautiful ship and very flawless.The shoes Nike Air Max 180 hovercraft significantly in the heel which is visible side of the base on most models.the design using cotton lining inspired Leahter feet. There are more and more popular, the success is to make materials and design feature styles. Nike Air Max 2009 is worth buying, rushed to use the time for direct purchase, brings great joy to you.Christian Louboutin Outlet

Monsieur Louboutin once said, "sexy is too vast to be defined, but more than anything it's an attitude much like elegance." Christian louboutin shoes is the perfect juxtaposition between sexiness and elegance. Whether you dress her up or dress her down, she will add a bit of attitude to any ensemble.

Is it possible you don't have the ideal hair brush for your style? A Babyliss Hair Straightener give your cut that hairstyle you've been longing for.

Thank you for sharing to us.there are many person searching about that now they will find enough resources by your post.I would like to join your blog anyway so please continue sharing with us