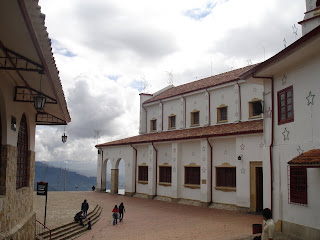 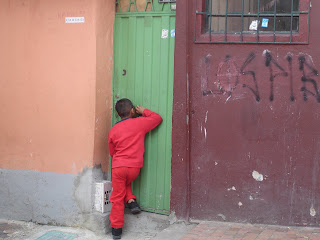 When I had decided that I’d tag along with J and his band on their South American tour, I figured that I would fall in love with the beautiful parks of Buenos Aires or the blue skies of Santiago in the springtime. Although I was excited to start the trip off in Bogota, Colombia, I wasn’t sure what to expect other than what little of the city I’d seen on Anthony Bourdain’s No Reservations: Colombia episode since it focused mainly on Medellín, which was not on the itinerary for us. 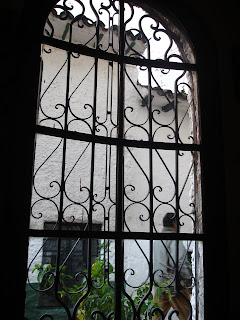 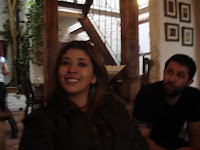 However, the four days spent in Bogota became the star of the entire trip and I found myself falling in love with the green mountains, colorful buildings, warm people and fantastic coffee (thanks Juan Valdez!). The weather was cool but sunny for the most part (save for a sudden, torrential downpour that lasted about 10 minutes) and I made a lifelong friend in the form of one girl named Carolina, who ended up answering a post I put up on a Craigslist-like forum called Poor But Happy, asking for a bilingual guide to show me the city. With her in tow, we felt like we got the most out of our short time in the beautiful city. 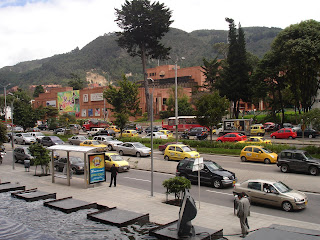 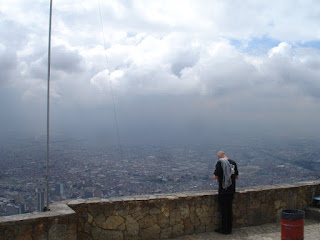 A few things about Bogota I’d like to mention, in case you ever decide to go for a visit (and you should!). The traffic is crazy and the taxi drivers are even crazier. The city has lots of rules to try and control the traffic- for example, if your license plate ends in “0” or “1,” you must stay off the road between certain hours of certain days. All numbers have these assignments. Even if you are ON the road and your restricted time starts, you must pull over and sit there for the four or so hours that you can’t drive. We checked to see if people actually followed this rule and by all accounts, they do- we saw no license plates ending in “8” or “9” while on the road one day. There are streets that are closed to two-way traffic during certain times of the day to help prevent gridlock, so during those times the taxi would be forced to take the longer, more winding road. I’m not over exaggerating when I tell you the cab drivers would floor the gas when we were going DOWNHILL and race around the practically 90 degree curves. These guys make the taxi drives in Mexico City seem like a herd of turtles. We all hung on to each other for dear life but did appreciate that we’d reach whatever destination quickly. 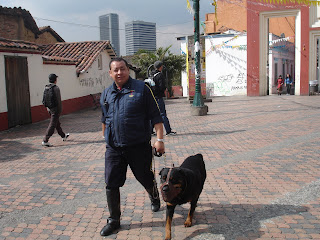 Another constant around the city: armed guards and their Labradors. They’re posted up in front of hotels, grocery stores, office buildings, on cobblestone streets in front of churches…..pretty much everywhere. They seem very non-threatening (failing to witness one of our friends getting held up at knifepoint for an ipod right in front of our hotel!! Friend was fine and it wasn’t as scary as it sounds) and their Labradors are happy to play with you. I did see a few muzzled pit bulls though, so maybe they’re for more serious situations. 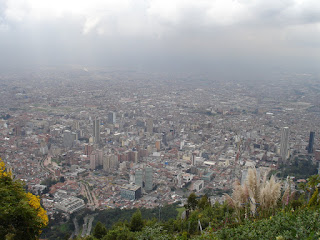 The altitude: Bogota is 2600 meters (roughly 8300 feet!) above sea level, so it takes awhile to adjust. I didn’t notice it when we landed, nor at our very late supper at a local bar (the promoter took us to some American-style bar that had awful Americanized pub food) but while lying in bed that first night, my heart was racing and I couldn’t get it to stop. J reminded me of the altitude and I was relieved that I wasn’t having some sort of heart attack, and the next day I was fine, save for a few winded hikes up hills. 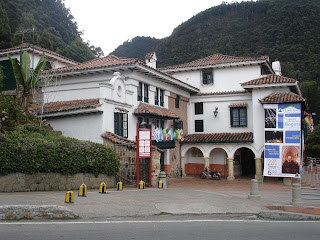 Base of Cerro de Monserrate 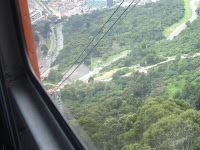 On our second day, we met Carolina for the first time in the lobby and I was happy to see that she was just as warm and friendly in person as she had been in her emails. A group of us set out for Cerro de Monserrate, the white church overlooking the city from atop a high mountain. We took the crazy cabs to the base of the mountain, then bought tickets for the teleferico (gondola) which took us to the top within minutes. The view from the teleferico was amazing, and the higher we got the more I could see just how enormous the city of Bogota truly is. 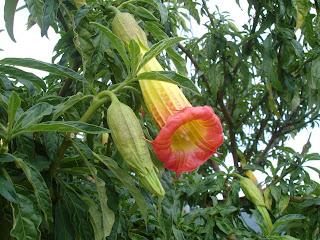 Once we arrived at the top, we strolled around the beautifully landscaped grounds, peered at the variety of colorful flowers and stuck our heads inside the church, where mass was being held. The grounds of Cerro de Monserrate were already decorated for Christmas, but since we went during the day we didn’t get a chance to check it out with all of the lights turned on. I bet it’s a beautiful sight. There is a small street of vendors selling various souvenirs directly behind the church, in addition to snack stalls and a few picnic tables. 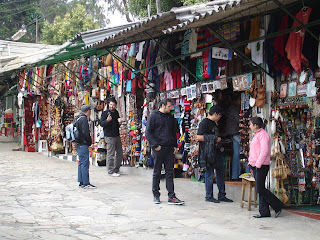 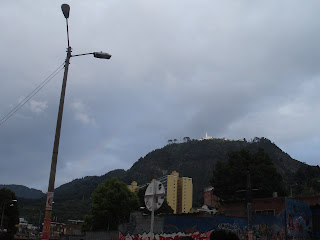 Looking up at Cerro de Monserrate...and we even got a rainbow!

We had wanted to eat lunch at the Colombian restaurant located near the church, but they were closed so we decided to skip the only other option (French) and wait until we made our descent and headed for another part of the city. When in Colombia, eat Colombian food, right? 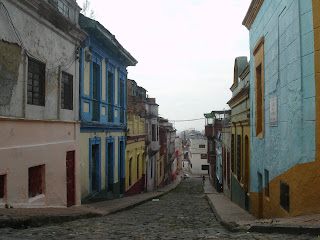 Oh, how soon did I forget those very important words as we found ourselves in a small café located in an area called El Chorro de Quevedo. This charming little town center had colorful buildings and lots of college kids milling about since it is located near a large university. We ducked into the restaurant (of which I do not have the name….bad blogger!) and settled into the small space, ready to sample some local grub. 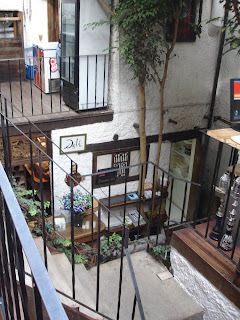 The small cafe was made up of many rooms on three floors...

So what did I order, you ask? Well, half of the menu was made up of crepes, which seem extremely popular in Bogota (there is a chain restaurant called Crepes y Waffles that is everywhere!) and the other half was made up of Colombian platos, or plates. Having had some of the greasiest food known to man the night before, I was skeptical of the large “meat platters for two” and decided to go the crepe route. A squid crepe, to be exact. One of the guys said “that doesn’t even SOUND good” but I turned up my nose, picturing a thin crepe covered in some sort of tomato-based seafood sauce which totally appealed to me at the time. J also ordered some seafood but the rest of the guys decided to get the platos to share. 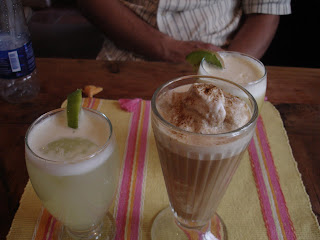 Some of the guys had beer but I wanted to try a frozen coffee drink, which ended up being delicious and perfectly strong over the crushed ice and milk. J tried a juice made from a local fruit called lulu, which was incredibly refreshing and tart. My crepe arrived, practically invisible under a giant pool of chunky white sauce swimming with squid rings. I did take a photo but I’ll save you the pain, really. Then I looked on in envy as the platos came- one platter of beautiful cured meats alongside three different varieties of locally-made chorizo, and two platters of the same chorizo set among a lovely set of golden, deep fried specialties. As the guys dug into their spicy meats, cheese-stuffed fried potatoes, empanadas, arepas and crispy plantains, I just stared at my losing dish and wished that I had listened to them. Sigh. Luckily some of them took pity on me and let me try the chorizo which was the best I’d ever had. I also got a bite of a dessert crepe topped with rum raisin ice cream and chocolate sauce. Yum. 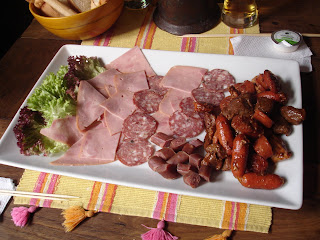 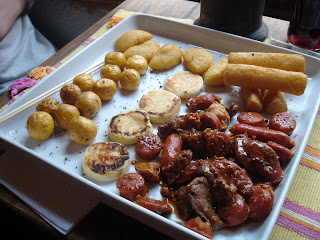 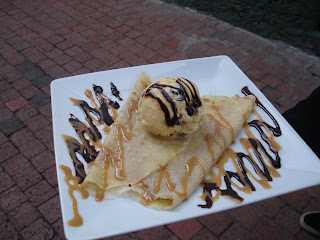 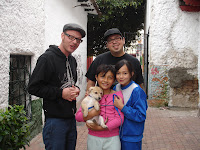 There were two cute girls playing with their tiny puppy just outside the restaurant, so we snapped some photos with them and then continued walking around the area. There were many sweets shops and bars for college kids, in addition to the oldest church in Bogota which sat right in the main square. We ran into the girls again when we noticed a small store selling homemade chicha, a non-alcoholic drink made from corn. I guess their mother was the proprietor and she was nice enough to let us try the juice-like drink, which was slightly sweet and a bit tart. It seems to be very popular in the area – we kept seeing signs that read “Chicha here!” in Spanish. 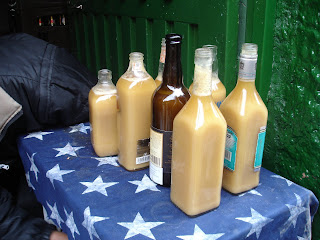 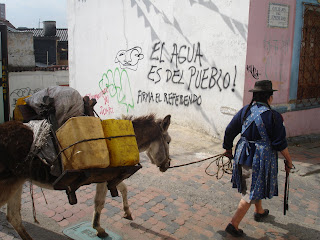 The tag reads "the water is for the people."

I really loved this little town square but we were headed to the main plaza next, which I will write about in the next post. There’s lots more Bogota to come, plus Buenos Aires and Santiago! 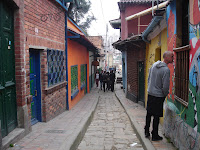 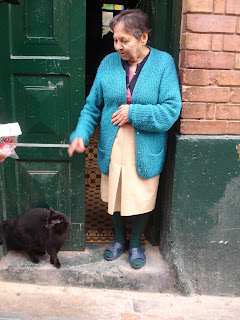 To be continued………..
Posted by Anne

Man oh man you have no idea how much I loved this post. can't wait to read more!

Ahhhh I love these pictures. Everything looks so good. Maybe I will go to Bogota next...

Great article. Here is the link to the restaurant's website HTTP://WWW.GATOGRIS.COM

Someone's thoughts can be so beautiful that we hardly thought but today we are seeing that your thoughts are very beautiful and I am very glad to see that you have written your thoughts your post is one of the best post which one One in a thousand can write, you are indeed a great post writer.
Your Partner
gurugram independent call girls
Call Girls In Sector 44
Call Girl gurugram
gurugram model service
Your heart breaks
Mistakes Happen
Sexual intercourse
Noida Escorts
escort service gurugram