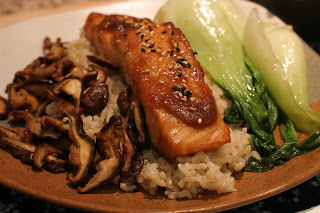 If you've ever dined at a Japanese restaurant, you've probably had a miso-glazed fish of some sort..most likely miso-glazed cod.  It's ubiquitous on most Japanese or sushi restaurant menus, and I really think it's because it is just plain delicious.  The dish is also very easy to prepare and uses ingredients found in most Japanese kitchens, so you can see why it's a regular on so many menus.  Now it can be a regular in your household too! 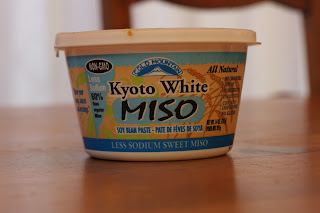 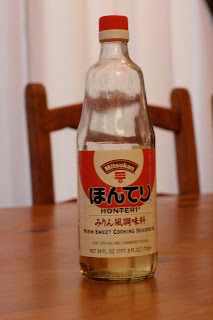 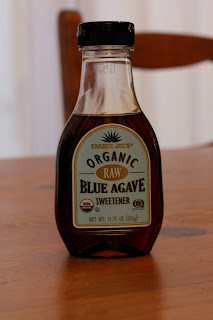 Agave nectar- che....wait, huh? (read on for the recipe!)
J loves it when I make Japanese food, so I thought I would surprise him with this dish.  I kind of mixed things up a little by adding Ginger and Garlic Braised Boy Choy as a side dish, since I rarely even buy boy choy.  I have nothing against it, it just doesn't fall on my "must-have" items, but one of my new year's resolutions is to start cooking more creatively (read: stop making the same things!) so I've been making an effort to pick up items I wouldn't normally buy.  Hello boy choy, welcome to my kitchen! 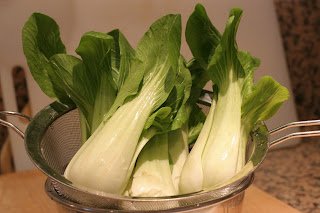 So I used Irish blogger Donal Skehan's recipe for bok choy.  I know...you're like, "An Irishman's recipe for Chinese cabbage?"  I've been reading more Irish blogs since my sister moved there (and became an Irish blogger herself) and it happened to catch my eye, plus it looked pretty authentic to me, so why not?!  Also, Donal seems to have such respect for vegetables (he grows his own bok choy) and I liked how the recipe let the cabbage shine more than anything (oh, another thing- this guy is poised to become the Jamie Oliver of Ireland- no joke- check out his blog!).  It was simple, came together quickly and was delicious to boot.  I had such great luck with it, perhaps next time I need to make colcannon I'll get the recipe from a Chinese blog.

On to the salmon!  I made a simple mixture of white and red miso paste, agave nectar (instead of sugar- it's already liquid and mixes better, plus it's better for you!), minced ginger, a touch of sesame oil, mirin and a touch of soy sauce and slathered it onto the salmon fillets to marinate in the refrigerator for an hour. 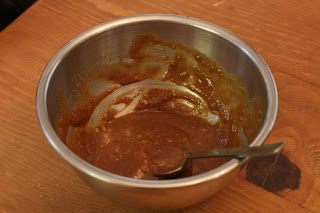 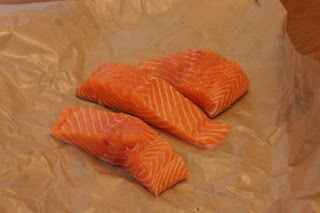 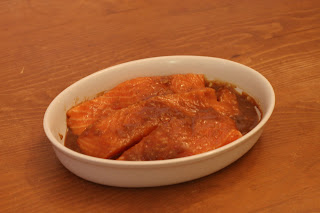 After a few minutes under the broiler, it was done, and the ginger aroma wafted through the house...yum! 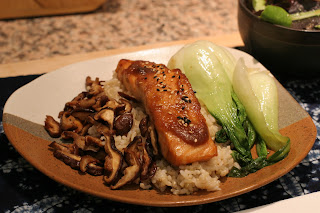 To add a bit more "meat" to the meal I sauteed some sliced shiitake mushrooms in a tiny bit of butter, then splashed it with mirin and soy sauce.  Serve everything with a nice, heaping scoop of fluffy brown rice and you've got a quick and healthy meal, but mostly you'll make it because it tastes really great!

2 TBS white miso paste
1 TBS red miso paste
1 tsp dark toasted sesame oil (make sure it's dark- the light totally lacks the flavor necessary to make this)
1 1/2 tsp agave nectar (if you use honey, make it 2 tsp since it isn't as sweet)
2 tsp minced ginger
1 TBD mirin (Japanese sweet cooking wine- you could use sweet vermouth or sake)
1 tsp soy sauce
4 6-ounce salmon fillets, skin off or on, depending on your preference

Mix the first seven ingredients together in a bowl until smooth and well combined.  Put the salmon in a dish and slather the entire mixture onto all sides of the salmon.  Cover and refrigerate for an hour (you could do it less if you like, but I think an hour is good!).

Preheat your broiler, cover your cooking surface (sheet pan, etc) with aluminum foil (for easy cleanup!) and spray the foil with cooking spray.  Lay the salmon skin-side down if you have skin on it, making sure to leave a nice coating of the marinade on the fish and broil for about 4 minutes.  Flip the salmon carefully and broil for another 3-4 minutes.  Alternately, you could do this in an oven- 425 degrees, 4 minutes per side.

Garnish with sesame seeds if you like, and serve.  I highly recommend serving it on a hot pile of rice (brown, white, jasmine, whatever!) since the miso glaze goes really well with it.
Posted by Anne

It's my goal to be more creative with my cooking too this year! No more quinoa all the time for me. I think.

Will definitely have to try this salmon some time soon - I've always been a sucker for miso cod. ;)

I haven't been paying much attention to using agave in cooking, but it's popping up a lot these days. I should give it a whirl (whenever I start making meals at home again :/)!

Instead of agave, I use honey!