Dinner For One #5: Sometimes You Just Need A Burger 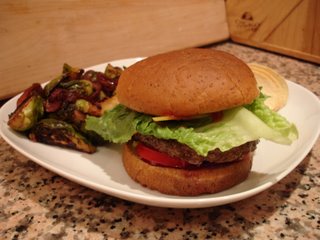 This is the last installment of my "Dinner For One" series for a little while since J is now home and will be for at least a couple of weeks. I'm glad I stayed in the kitchen even on those nights where I had to nosh alone, because a lot of good eats came out of it! As tempting (time wise, at least) as it is to just heat up a Lean Cuisine pizza, the results just aren't 1/10 as satisfying as having something homemade.

Speaking of satisfying, I felt the need to satisfy an urge I had the other night for a big, old-fashioned cheeseburger. I don't eat them nearly as often as I get a craving for one, and it had literally been months since my taste buds had come in contact with anything resembling a burger. Keeping in mind that I try to eat as healthy as possible (to balance out my wine habit!) I took a short trip to Trader Joe's with the focus of brain surgeon. I knew what I had at home (spicy mustard, ketchup, pickles, lettuce, kewpie mayo - don't gag..! Mayo in small amounts is good on a burger!) and knew what I had to purchase in order to create my burger. I picked up a 4-pack of already formed "super-lean" ground beef patties, sliced cheese, a pack of bright red tomatoes and a fat, red onion. The only buns available at TJ's are these massive white ones or the too-sweet honey-wheat ones which I'm not crazy about. A quick stop at Von's and a pack of Roman Meal Multigrain Buns (I like my buns to be hearty....ha) later, I was home and ready to start my mission! 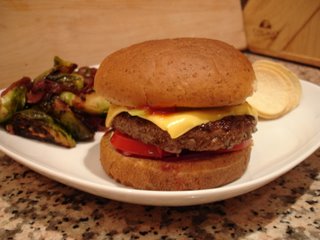 Whoops, forget the lettuce in this shot...

First, I had to prepare the side dish. What goes best with a cheeseburger, you ask? Well, fries, of course. Unfortunately I was not born with Kate Moss' metabolism so I decided to have a serving of Fat Free Pringles, which are surprisingly delicious and yes, I am aware of the, er, digestive side effects warning on anything containing olestra products but have never, ever experienced any sort of tummy aches eating these.....but again, probably because I hardly EVER buy them. I think, as with anything, moderation is key. Ahem, back to the topic at hand. What better to top off a meal of cheeseburger and potato chips than a nice big helping of Brussels sprouts, right? I knew that's what you were thinking. When people think "cheeseburger!" they immediately go to "Brussels sprouts!" Ok, well maybe not but I love me some Brussels sprouts IF they are made properly. My love affair with the little green cabbage-like creatures started at Firefly Bistro in South Pasadena where they come almost BLACK- sautéed to a golden....well, black. The sugars in the Brussels sprouts make a delicious crust if they are sautéed long enough. Over the last year, I've learned to make my own version with some onions and a splash of balsamic and it's been in regular rotation at our house. 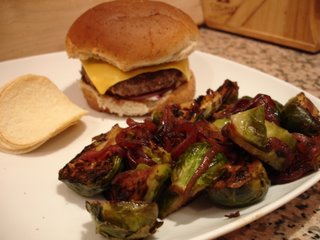 After making a batch of those, I cooked my beef patty to a nice, medium rare and piled on all of the fixins'. This healthier version was just as juicy, delicious and flavorful as any cheeseburger I'd had and filled that NEED for one. It was so good that I actually had the exact same dinner the night after! Now I have two patties left in the freezer and I think I'll have to treat J to a cheeseburger dinner this week. 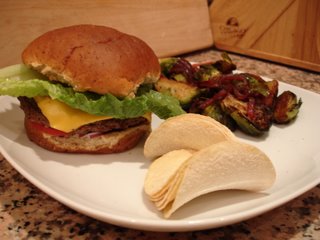 Cheeseburger, get in my belly!
Posted by Anne

it's awesome that you've been cooking delicious dinners all for yourself. too often i feel tired and lazy and just finger pick stuff out of the fridge.

i love brussel sprouts! i use balsamic too but also pancetta lardons and a bit of demi-glace. where you get yours? i don't think i've seen any at my produce market.

Just delurking to say that I love your blog!! Your "Dinner for One" series is cool--

strange- i just had the same craving for a burger and -voila!- i had one at a birthday party... it was like a mini-meatloaf because the cook added diced onions, spices, and an egg. heavy, but delish!!

Yoony: I got my brussels sprouts at Trader Joe's- they come in a bag that you can just poke a hole into and microwave so it steams them. The Firefly Bistro version uses pancetta too...I have to use those next time but I'm trying to watch my fat intake...although, screw it! I'll try it that way next time.

Tokyo Rosa: Hi! Thanks for stopping by- I will check out your blog too. I miss Tokyo...how lucky that you are there.

Red Sun: Mini meatloaf- sign me up! I love meatloaf...it's one of those foods that get a bad rap but it's soooo good if made properly, don't you think?

Do you mind posting a recipe for the Brussel Sprouts? They sound (and look) so delicious! :)

Sera: I just get some brussels sprouts, cut them in half, then steam them for about 5-6 minutes until they are tender. Heat a tablespoon of olive oil in a pan, then add sliced shallots or red onions until they are soft. Add the brussels sprouts and make sure that the flat side is facing down on the pan. Heat for awhile- don't touch them- until they get really dark. You can flip one once in awhile to check. When they've turned mostly dark brown/black, add a nice splash of balsamic and try to scrape up the blackened bits at the bottom of the pan. Add salt & pepper to taste.

Sounds so easy and, of course, extremely yummy! :)

I love Brussel sprouts. I get mine from TJ's as well. One of my favorite light dinners is Brussels sprouts and konnyaku simmered oden style with a bowl of rice on the side. Some hot mustard gives it just the right bit of kick.