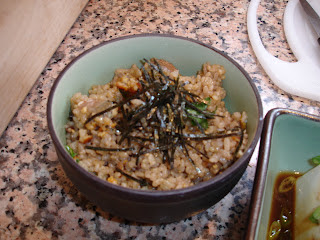 To celebrate J's return from Japan, I made a simple Japanese dinner. Even though he had three days of Japanese food, I knew he'd want more as it's pretty much his favorite cuisine of all time. He told me that he had some good yakitori, lots of Japanese yogurt (which is, in our opinion, the best yogurt ever!) and even a dinner at the Shibuya branch of Gonpachi! So I guess he and I were at the same restaurant on the same night, but he was in Japan and I was in Los Angeles. Oh- and his food was far superoior to the just ok meal that I had. At least I could console myself with the various Kit Kats he brought back (I had requested he pick up any different flavors he saw). The macha/milk flavor was my favorite, but the chocolate banana and the chestnut flavors were good as well. 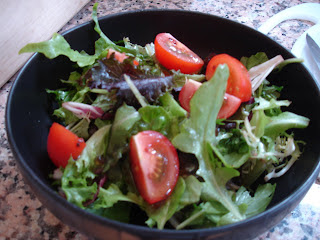 I read a few Japanese cooking blogs and am always inspired by the recipes and ideas on them. When I saw Naoko's Unagi Onigiri, I remembered that I had some unagi in the freezer and decided to make the rice. 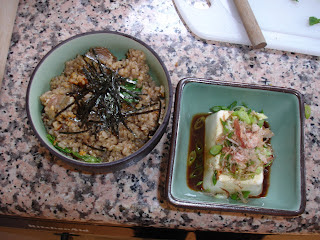 I pretty much followed her recipe but used Japanese brown rice instead of white. After washing the rice I added the soy sauce, sake, sansho pepper and multigrain mix to my rice maker and set the timer for it to be ready when I got home from work. About 20 minutes before the rice was done, I added sliced unagi to the pot, then mixed in some mitsuba at the very end. The whole house smelled like unagi and sansho........YUM.

I didn't make onigiri out of it but instead piled the rice into bowls and topped it with some nori seaweed. A salad tossed with wafu (Japanese style) dressing, hiyayakko (cold tofu) topped with ginger, scallions and katsuobushi (bonito flakes) and some spicy eggplant suzuke (Japanese pickles) completed our meal. Oh, that and a glass of cold sake of course;).

By the way, the food came out way better than these photos!
Posted by Anne

Had ungani last night as well. Such a great thing to have in the freezer for a quick tasty meal. I got a hint from my mom in Japan to steam the frozen unagi in foil with sake in a frying pan for a bit (10 minish), then finish with pouring scolding hot water and close up the foil, to wash away the excess grease. Throw out the excess juice and place on top of hot rice. It made it amazingly fluffy and light, so it allowed the unagi sauce to go really well.

if it came out better than those photos it must have been etheral, because those photos look gorgeous. my mouth is watering.

your meal looks delicious!
unagi is hard to come by in the northeast where i live, but i've often had it at japanese restaurants. i love it, and wish i could make meals with it!

Wow, does that look amazing! I have never been brave enough to attempt making Japanese food - you make it look so easy! I have a feeling that, if I tried to replicate this meal, it would be a huge failure. Oh well...a girl can dream....

Kei: Your mom's idea sounds great- unagi can definitely get oily. I bet the sake makes it taste even better. Thanks.

Liz: Thanks for your kind words. Sometimes I'm so hungry that I just don't have the patience to take good photos;) and usually, by evening, the light isn't as flattering.

Red Sun: Thanks- I read your blog too! I hope you'll be able to find some frozen unagi at a Japanese market- it's honestly just as good as unfrozen, and comes ready to eat.

Foodette: Have rice maker, will make Japanese food! You should go out and buy an electric rice maker and you'll see how easy it is to make lots of Japanese rice dishes. You can set the timer so it's ready right when you're ready to eat too, and add lots of different flavors to it. Good luck!

Your unagi and brown rice bowl is such a creative idea!
I was not going to make unagi donburi this summer because of the problem with imported unagi, but when I saw a cooking show on TV introducing a new unagi-bowl idea, I just gave in. My post of the unagi donburi is coming soon. But it is not as creative as yours. Definitely.