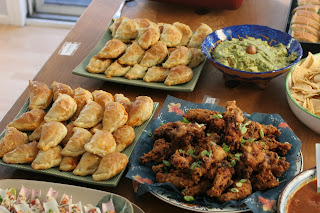 Ah, The Super Bowl.  It might be the second biggest eating "holiday" in the U.S. after Thanksgiving.  I'm not really sure where the tradition of stuffing your face while watching football started, but I'm not complaining about it!  I mean, any excuse to eat while watching TV can't be bad (for your soul...but it could be bad for the body!) plus the food gives the football haters something to focus on while the others scream loudly at the television as if the referees can actually hear them.  Which is probably why I made SO much food yesterday.  As you may know from reading this blog, J is a musician.  As you can probably guess, none of his musician friends watch sports of any kind.  So the food was the reason they came, while only a couple of us actually watched the game.  It was a win-win for everyone (OK, maybe not the Steelers...oh well...).
I don't know why I but I always make way more food than necessary, whether it's for a special occasion or just a regular ol' night.  You'd think I was cooking for the Duggars (that family that has like, 100 kids) but I guess I always feel it's better to have too much that too little.  Of course during the 4th hour of cooking I often wonder what the hell I was thinking, but then I get out of the weeds and it all works out.  Isn't that the joy of cooking?!  I just have this need to feed people...it's what makes me happiest, so I'll come up with any reason to cook mountains of food as long as there are people willing to eat it.
Since we only had a few people over, I sent each person home with enough food to last them a week.  I think next time I'll take it down a notch and remind myself that our guests aren't bears and do not need to eat enough to sustain themselves until spring.
Here's what we had:
Lobster salad in endive cups.  Normally I make this with crab, but J and I bought a 5 pound lobster at Shun Fat El Monte Superstore for under $20, so I figured why not?  Do you know how much a container of dungeness crab meat costs?  A lot more than this giant specimen of a lobster!  The claw meat was amazingly tender and worked really well in this dish. 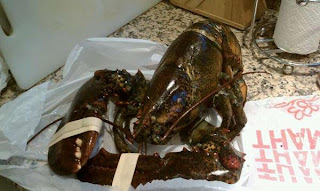 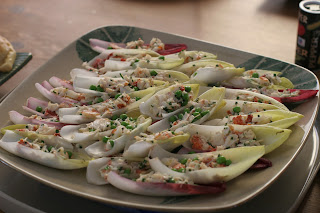 Two kinds of empanadas: 1) Soyrizo, corn and cheese empanadas and 2) Butternut squash, black bean and salsa verde empanadas.  I find it's easiest to keep a lot of party dishes vegetarian friendly, and as long as they're satisfying, the meat eaters won't even notice.  I took a shortcut by purchasing empanada dough discs from Figueroa Produce- they sell three kinds, all in their freezer section. 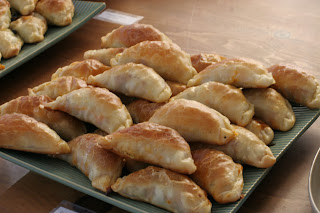 Lightly blanched green beans and asparagus with sesame dip.  I just whizzed one block of silken tofu in a blender with some Japanese toasted sesame oil, sesame seeds and sesame salad dressing.  It was thick and delicious- try substituting silken tofu for mayo in your next dip recipe and you'll see how creamy it is! 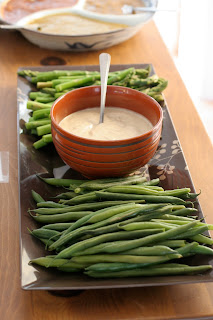 Italian sandwiches: Tofurky Italian Sausage sliced thin, provolone cheese, mixed greens and pesto.  I made big sandwiches the day before on ciabatta bread, wrapped them tightly in plastic wrap and compressed them with cans, then unwrapped them the day of the party and sliced them into smaller sandwiches. 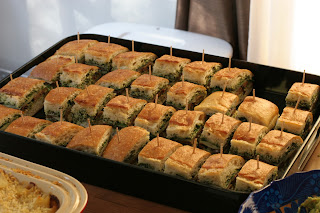 Guacamole and three kinds of salsa: I made the guac- you can't have a Super Bowl party without it- and bought the salsa from Cacao Mexicatessen in Eagle Rock. 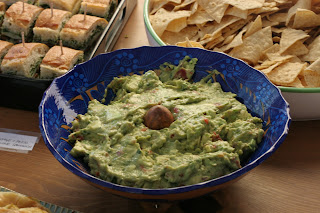 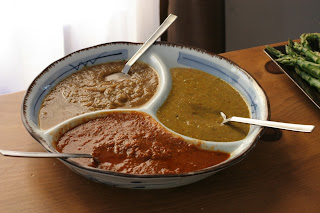 Japanese fried chicken drumettes: My mom used to make these for my sister and me on special occasions like birthday parties, and they are absolutely my favorite kind of fried chicken.  Just marinate the chicken in a mixture of soy sauce, mirin, garlic, ginger and green onions for a few hours, coat them in a mixture of equal parts flour and potato starch, then deep fry (I used peanut oil).  You don't need any sauce since the flavor is built right in.  DEEEELISH!  I garnished it with some extra chopped green onions for color. 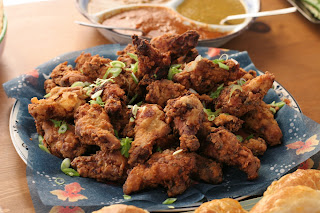 Ina Garten's Macaroni and Cheese: Easy to make in advance so you just pop it in the oven 30 minutes before guests arrive.  Always a hit. 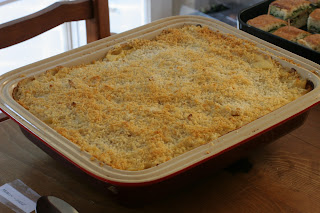 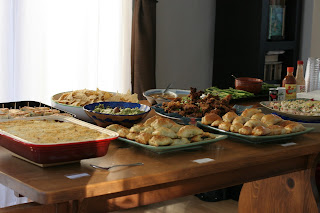 What did you eat on Super Bowl Sunday?
Posted by Anne

woooooooow that is one fancy super bowl party! Im use to the usual doritos, hot dogs and miller lite :P

Ohmygoodness Anne! This looks amazing. Can I tell you how much I dread Super Bowl food? I love what you did!