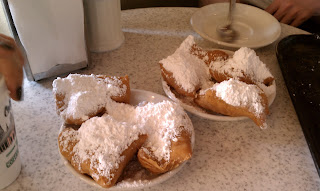 Last week, I took my maiden voyage to the great city of New Orleans.  My best friend M was my partner in crime since she'd lived there for six months a few years ago and had been itching to get back.  When you tell people you're going to New Orleans, the recommendations start coming almost immediately about where to eat and what to eat.  Having seen my fair share of Diners, Drive-Ins and Dives, I had a few ideas myself, and M and I set out to sample as much of NOLA's amazing cuisine during our short, 2.5 day trip.  Fried oysters, here we come!

I'll keep the copy short on this post since I took a TON of pics, but I'll let you know that I loved most of what I ate- I just needed a bigger stomach!  I had an amazing trip and wished we had more time to sample everything New Orleans has to offer.
Without further ado: Our NOLA trip!
Ritz Carlton, New Orleans:
M and I checked into our hotel and fell in love instantly.  Our room was very spacious, the beds were like marshmallows you just wanted to sink into, and we had a view of the city.  A special thanks to J for letting us use his United miles, so our 2 night stay was freeeeeeeee!  Great things are just better when they're free..did you ever notice that?! 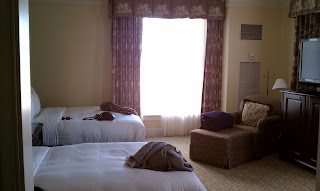 The courtyard is something else- we sat and had cocktails while looking at the colorful flowers and enjoying the balmy, spring breeze. 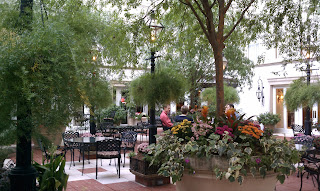 First night dinner: Jacques Imo's:
M knew immediately that Jacques Imo's was where we would eat our first meal in NOLA as she used to go often while living there.  We drove up at around 7:30pm and was told there would be at least an hour wait, so we ordered a watermelon mojito to share while watching even more people pile into the restaurant.  That mojito was SO delicious and refreshing and had chunks of fresh watermelon inside, so I wondered why on earth I'd never had one before.  Note to self: order watermelon mojitos from now on.  After we were seated, this plate of their famous cornbread muffins was set on our table: 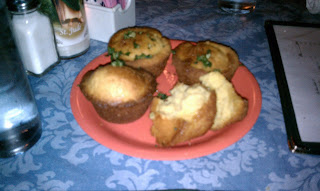 Ok, totally bad photo- the restaurant was dark but at least you can sort of tell what these look like.  They were sweet and crusty on the outside, and had warm garlic butter drizzled over the top.  I mean, seriously...what's not to like?  The rest of our meal- crab cakes, fried green tomatoes and shrimp etouffee- was good, not mind-blowing, but the southern hospitality doled out by the staff was enough to bring me back on my next trip.  Here's a view of the kitchen: 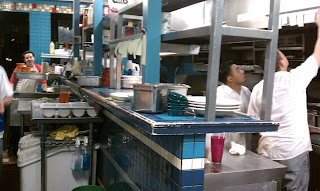 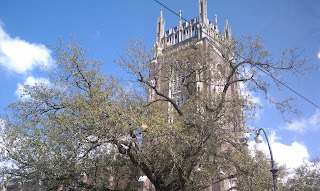 M and I took the street car down St. Charles Avenue and I couldn't stop gawking at gorgeous home after gorgeous home.  Spring was in the air and there were flowers blooming everywhere- I almost felt like I'd gone back in time riding the vintage street car. 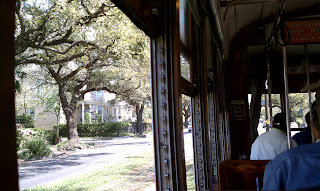 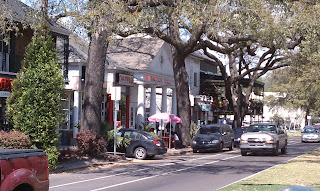 This was another place M had dined at often, so we all went to breakfast there on our second day.  The place looks like a mini White House from the outside, but once you walk in, it's a counter-seating-only diner.  The waiter stands in front of you, takes your order, then starts calling them out to the cooks who are behind him.  They never make eye contact and don't even seem to be listening, but it totally works like a well-oiled machine and is very entertaining to watch. 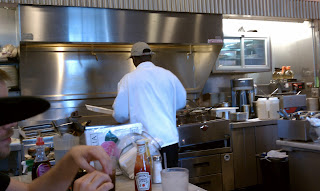 I got the catfish sandwich because I just wasn't feeling eggs, and it was one of the smaller things on the menu.  It was fried to perfection- so much so that I took a bite before remembering to take this pic.  Ah well!  It was probably one of my favorite things I ate on this entire trip. 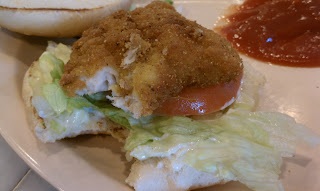 M got this behemoth omelet with mushrooms, cheese, and a side of french fries.  After I snapped this pic, she asked for cream gravy to douse the omelet with, so it was even more of a gut bomb that it looks. Honestly, I have no idea where it all goes on my slender friend- it's not fair!  I took one bite and it was delicious but would have put me in a permanent food coma. 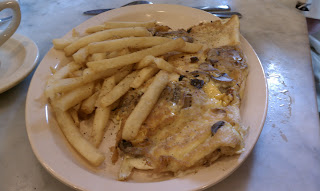 J ordered this sandwich stuffed with sliced turkey, ham, and enough cheese to kill a cow...all doused with Russian dressing. 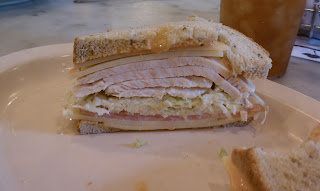 SO after M and J polished off their massive breakfasts, they decided the only thing missing was hot apple pie topped with ice cream.  When in Rome..... 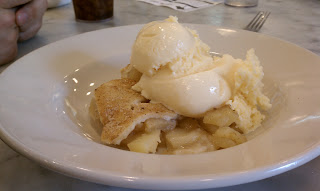 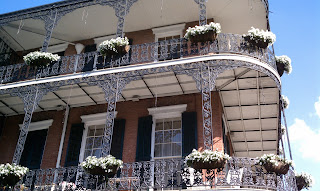 M and I strolled around the French Quarter, bought some Tabasco Soy Sauce at one of the gift shops (hello?  Tabasco + soy sauce = heaven!).  I enjoyed looking at the beautiful architecture and listening to local musicians play in the park. 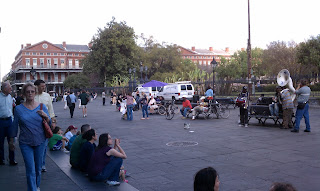 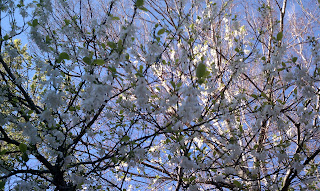 Later that night, we took a short walk through Bourbon Street, just so I could see it since I'd never been. I definitely never need to go back.  I mean, not to be crude but it smells....not good.  It just struck me as the kind of place people go to drink too much, eat too much, and do EVERYTHING too much.  I guess I just have no interest in a place like that, but I can see how to would appeal to others.  Anyway, I was glad to have gotten it out of my system.  Sorry Bourbon Street- you're just not my scene.
Lüke 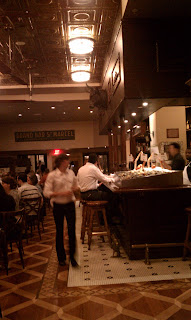 The one place I insisted we go to was John Besh's Luke.  First of all, I absolutely adore John Besh.  I think he could charm the pants off of almost anybody with his Southern good looks and giant blue eyes. Oh, and he can cook too (understatement!).  The guy is a legend not only in NOLA but in the United States, so I had to sample some of his offerings.  After Katrina hit, he went around town in a flat bottom boat, dishing out bowls of red beans and rice to those in need- I mean, how can you NOT love this guy?  A big group of us went, and here's what we had:
J, M and I shared a platter of Gulf oysters.  They were briny, salty and totally addictive. 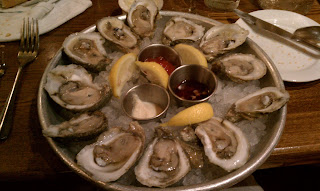 I ordered a cup of gumbo, but ended up trading with J for his cup of crab bisque.  Both were good, but I preferred his and he preferred mine, so it worked out! 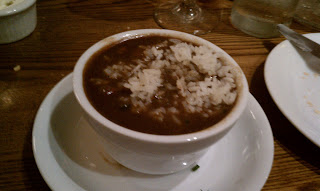 M's fried oyster salad- another blurry shot, but I had to get it in.  I snuck a couple of fried oysters and they were just perfect. 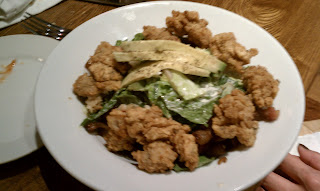 Our friend Jen ordered this massive cassoulet made of white beans, buttered bread crumbs, duck confit, housemade garlic sausage and pork belly!!!  Yes, it was as heavy as it sounds, but the kind of thing that has such great flavor that you want to keep eating it.  I think everyone at the table helped her a bit, although we barely made a dent in it.  It was just too much of a good thing. 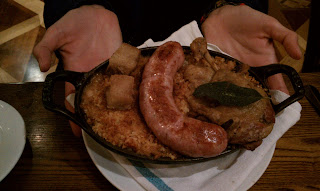 Another friend H ordered this ravioli of local crab meat with a creamy lemon sauce.  When I took a bite, it made me wish I'd ordered it! 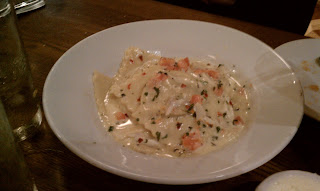 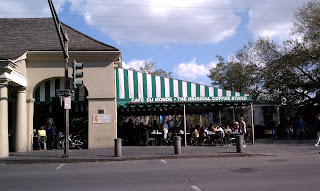 No trip to New Orleans would be complete without a visit to this legendary coffee and beignet shop, so we squeezed it in right before catching our taxi to the airport.  We ordered two plates of beignets and an iced cafe au lait to share.  Both were outstanding, and it was fun trying to keep the massive amounts of powdered sugar off of us- our clothes, bags, shoes, hair....it's really hard not to get any on you!  I can see why it's so popular- the puffs of fried dough were chewy, crisp and yummy. 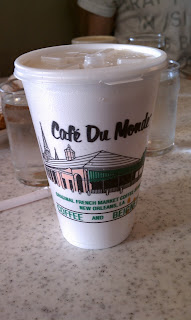 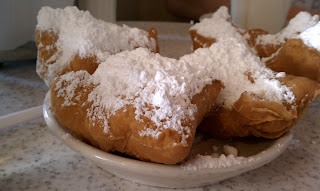 So that's the whirlwind trip to NOLA!  I think my favorite part was riding the street car down St. Charles Avenue, and hearing the locals talk to each other.  I could sit and listen to that N'awlins drawl all day long.  You could read the dictionary with that drawl and it would make me want to sit on a porch swing and sip on a mint julep while fanning myself, saying things like "Why I declare!"  OK, maybe I'm getting carried away but you know what I mean:).
What's your favorite thing about N'awlins?
Posted by Anne

Clare - An American in Ireland said...

NOLA food is super heavy but still nomz. One of my fave places was actually Emeril's NOLA restaurant, that's the name, actually. It's more fusion-y with some Asian and Italian flare. Loved!

WM: Yeah, those beignets were pretty awesome. I really liked how mochi-mochi they were (that's Japanese for, uh, mochi-like!).

Clare: Yeah..if only we'd had more time! Next time I'd like to stay longer and try more restaurants.

Fantastic read, I just passed this onto a friend who was doing a little investigation on that. And he actually bought me lunch because I found it for him smile So let me rephrase that: Thanks for lunch!

The foods look so delicious.