I don't think I've ever met anyone who doesn't like pizza. I also think part of the reason that pizza is an internationally loved food is because everyone has a different definition of what exactly "pizza" is.

For me, pizza means an ultra thin yeasty crust that's crispy on the edges and chewy in the center topped with a light layer of good tomato sauce, a sprinkling of fresh basil and some nice chunks of burrata cheese barely melted. For my friend E, it has to have a medium crust with loads of great pepperoni and chewy cheese- his favorite being the version at The Rainbow in Hollywood. He scoffs at the idea that smoked salmon on flatbread that's been coated with cream cheese, a la Wolfgang Puck, is even called pizza at all. Some people love deep dish Chicago pizza which, to me, is more like a meat pie than anything else. How anyone can eat more than one or two hunks of that is beyond me. And part of the fun of eating pizza is to seriously chow down, isn't it?

Speaking of being completely piggish (admit it, you love that segue), my husband and I ate both of the rather large (but THIN- we aren't total gluttons!) pizzas that I made last Saturday. It was my first attempt at homemade pizza dough which probably puts me years behind most of you, dear readers and fellow cooks. I've always daydreamed about making the perfectly flavored, thin pizza crust but I never actually got off my butt to try.....until I caught an episode of "Tyler's Ultimate" on the Food Network about the "ultimate" pizza. I was barely paying attention until I caught a glimpse of this stern-yet-cheerful chubby Italian woman pouring water into a bowl of flour. She kneaded the dough, put a bunch of gorgeous smoked tomatoes on it, ripped up nice chunks of mozzarella and some fresh basil on top and stuck it in the oven. The resulting pizza looked so utterly delicious, and Tyler, with gushing sincerely, exclaimed that it was "the best pizza I have EVER had in my ENTIRE life." I believed him. I was hooked.....I was on a mission.

After fruitless pleas to my husband to build me a wood-burning oven in our backyard, I focused my efforts on finding the best ingredients to make my truly authentic Italian pizze. I came back from a trip to Claro's armed with my Italian "00" flour (SO excited!!!), a can of Italian tomatoes (I wouldn't even know where to look for smoked ones), two bottles of flat Italian water and a bag of fresh burrata mozzarella. After picking up a huge batch of basil from TJ's, I was set. The one thing I couldn't find was fresh, cubed yeast. Honestly- I don't even know where to look for it at the market- and I call myself a baker. I'm an embarrassment to the bakers of the world, I know. I had to settle for my little pack of dry yeast instead.

The dough-kneading went quite well and it turned into a nice smooth ball after only a few minutes. I covered it with a towel, put it in a warm place and tried not to peek every five minutes. After about 90, it had risen but not quite as much as I had hoped. So I waited. I combined the canned tomatoes, chopped garlic, a few squeezes of both tomato and anchovy paste (btw, whoever invented the whole food-paste-in-a-tube thing is a genius! Now where's the chipotle paste in a tube? Where?) and some good olive oil to make the sauce. Checked my precious doughball again to see that it had only grown about another inch. So be it- I took it and rolled it out anyway- and it was very soft and pliable so I remained hopeful. I slathered it with my tomato sauce and put the basil and burrato on and carefully slid it onto my scorching hot pizza stone in the oven. I was giddy with anticipation. 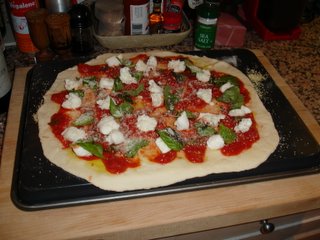 I checked on it after about 15 minutes and saw that it still needed a few more. When it felt right, I pulled out my pizza. It looked nice and thin, the edges looked crisp and it smelled fantastic. Now the negatives- the crust didn't really brown at all and my poor burrata was melted beyond recognition into yellow/brown discs. Why? Because I didn't listen to the stern-yet-cheerful chubby Italian woman who made the best pizza Tyler had ever tasted!! She patiently waited to put the basil and cheese on her pizza until after she had baked it for an initial 10 minutes. She then pulled out the almost done pizza, put her toppings on and then slid it back into the oven for just enough time to let the cheese melt into smooth pools of white, not harden into lava rock like mine. I was guilty. I knew I should have listened to Italian Lady- and I learned my lesson. 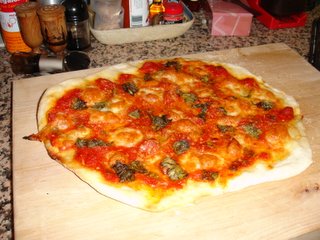 Ok- so obviously the pizza was still completely edible. My husband poured the wine, I cut the pie and we dug in. Verdict? We LOVED the sauce to which of course I did not write down the exactly recipe but am fairly confident I could replicate again. The crust's texture was good- crunchy edge and slightly chewy middle. The main problem was a lack of flavor on the crust. There was no great bready flavor. You know how you could have two beautiful baguettes, and one will taste ok and the other just tastes like beautiful, fabulous bread? Well, my crust was the former. It looked like crust, chewed like crust but it just didn't taste like....well, much of anything. 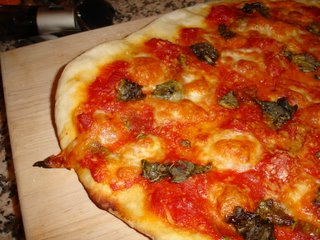 So again, I implore you, dear readers and fellow pizza makers, to please give me some insight into what makes a crust delicious, golden and bubbly. What makes it taste wonderful? What makes a crust brown (besides heat)? Because I know that my urge to brush the edges with eggwash would have every single Italian grandmother turn over in her grave and converge onto my house. It would be Night of the Living Dead Italian Grandmas. And you know I hate zombie movies. And zombies. 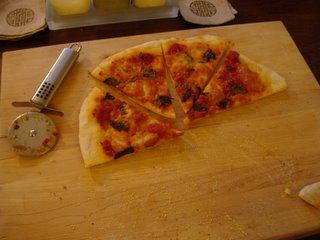 wow the pizza looks fantastic! I'm a fan of thin crust too and I find that it works great when I just turn the oven up as high as it can go. I only need to bake for around 10 min to get the crust golden brown.

I agree with Cin, you want the oven as hot as you can and you want the stone to have heated upfor a minumum of 1/2hour.
Did you bake the pizza on the metal tray? I make mine on baking paper and then use a board to transfer the pizza to the oven on the paper.

did you know that one of leonard bernstein's favourite hangouts was the rainbow?

you'll want the dough to have time to ferment to develop the flavour. proof the yeast, you'll get good results: dissolve one packet of dry yeast in a quarter cup of tepid water (if you stick your finger in it, it shouldn't feel any warmer or colder than your finger), and a bit of sugar to feed it. i try to use a glob (maybe a couple of teaspoons?) of quality european honey with herby or florally tones for pizzas; i'm not entirely sure if it's because of this type of honey or because it's so humid and hot here that i get a really nice fermentation which produces an almost sourdough-like flavour within a short period of time. let the yeast sit out in a warm place for 10 minutes until it's superbubbly, then mix that into your flour. if you have the time, do what clare suggests and let it rise in your fridge, but if you don't, allow for about an hour or so in the warmest, most humid place you can find--i usually zap a cup of water for a couple of minutes in the microwave, take it out, then place the dough in an oiled bowl into the still warm, steamy chamber and shut the door.

i don't know where you'd find smoked tomatoes in los angeles (maybe surfas or sorrento's market near lmu??), but you could always add a tiny drop of liquid smoke to your tomatoes. it is also near impossible to find fresh yeast in la (it's also called compressed or cake yeast) on a retail level. if you know someone at your local artisanal bakery, they might be able to sell you some, but i'm under the impression that regular active dry yeast was made to replace compressed yeast, and on a commercial basis, liquid yeast was formulated. if you proof your yeast as above, you've pretty much got liquid yeast :)

Cin: Thanks for reading!

Clare eats: I will try the overnight dough idea- it will actually make life a lot easier to make it in advance anyway

Santos: Didn't know that about the Rainbow! I actually think the pizza there is just ok...not really my style. Thanks for all the tips- you're right about letting the yeast ferment in the water for awhile- I got impatient and didn't wait.

You can buy chipotle paste in a tube here!