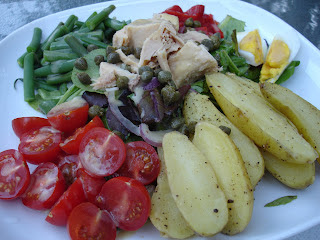 Frequent readers (all two of you;) of Tuna Toast know that tuna is one of my favorite foods. I mean, this blog is called Tuna Toast for a reason, my friends. With so many exotic and interesting things to eat in the world, why is tuna one of my top five? I think it has to do with the fact that I ate it often growing up, and my parents made a simple can of tuna taste really darn good. Tuna sandwiches were a favorite, tuna casserole, tuna macaroni salad........it was never too loaded up with mayo and had bits of chopped red onions and other goodies. Now, when I taste tuna, it always takes me back a little, so part of my love for it is definitely sentimental. 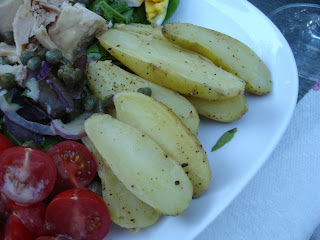 Fingerling potatoes from the farmer's market

When we were in Nice a couple of summers ago, tuna was everywhere- on pizzas, in salads, and in the ubiquitous sandwich, the tuna Niçoise, or pan bagnat. It's basically a simple crusty roll filled with olive oil packed tuna, boiled eggs, olives, radishes, anchovies and other delights, depending on the maker. Basically, I was in tuna heaven, and I truly believe that the hot Mediterranean Sun and scent of the cool, blue water made the tuna taste even better than I'd ever had it. 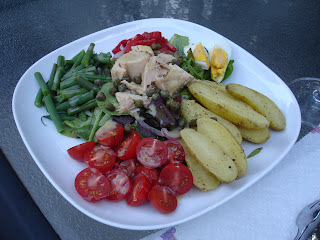 Since I had a can of olive oil-packed tuna in the pantry, I decided to whip up my version of a tuna Niçoise salad for dinner the other night. I just tossed some arugula and baby romaine in a dijon vinaigrette and piled it high with tuna, boiled eggs, roasted red peppers, green beans, baby tomatoes and these beautiful fingerling potatoes that I purchased at the farmer's market. I had to leave out the namesake ingredient- the Niçoise olives- because you know well by now my disdain for olives of any kind. I did sprinkle some capers over the top to get some of zing from the brine.

The salad was enjoyed on our patio with a nice glass of sauvignon blanc- it's been pretty warm so it's nice to eat outdoors. The potatoes were so creamy and flavorful- I had tossed them in some of the vinaigrette while they were still warm so they'd soak up the dijon. It wasn't exactly like sitting on the beach in Nice, but it did take me back a little bit. 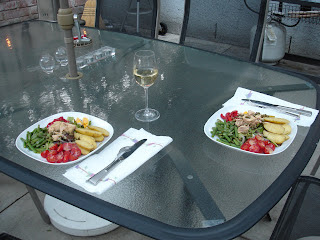 Looks great! I've never had that particular salad before. I've always been curious as to what's in it, since it's so famous.

that looks so delicious. and healthy!

Hi TAS, I read your blog regularly too...though I have been lazy about commenting. This salad looks great!