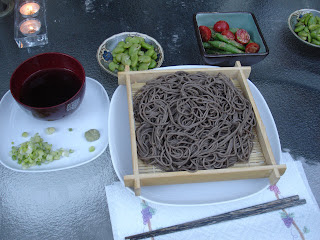 So May Sweeps on the television is almost over, and what a week its been. Not only do I love television, but I have to watch a lot of it for my job (whether I like the show or not) but who can complain. As my boss always says "What other job requires you to watch television?!?!" He's right- it's not like I have to risk life and limb catching crab in the Bering Sea or nothin' (Deadliest Catch is possibly the best show on television and explains why crab costs so dang much!).

In addition to the American Idol finale (eh, it would have been more interesting had Blake won...it was a so-so season but that performance with Doug E. Fresh was awesome), Heroes ended with a bang (literally) and Dancing With The Stars closed out with Apolo Anton Ono (shout out to the Hapas everywhere!) crowned the winner. But really- who cares about any of this when LOST just blew it all out of the water with last night's season finale?!?!?! I had to remind myself to breathe during the entire two hours. One of the editors I worked with put it best when he said "The last five minutes of LOST last night was as significant as when Darth Vader tells Luke, "I'm Your Father" in terms of major twists in pop culture history." Now before you Star Wars maniacs start writing me hate email, remember that I'm simply quoting my co-worker. Not really being a Start Wars maniac myself, I can't really compare but I can tell you- it was awesome!

Anyway, back to LOST later. Here's a soba dinner we had recently. 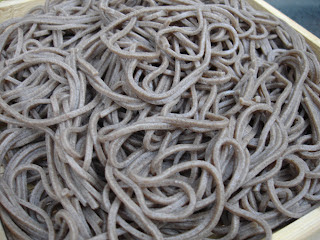 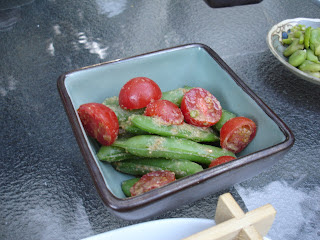 Soramame (fava beans) boiled, peeled and tossed with some yuzu pepper. They sell bags of frozen fava beans at Mitsuwa, and although they aren't as good as fresh, you don't have to take them out of the pods so it's great for a quick snack or sidedish. 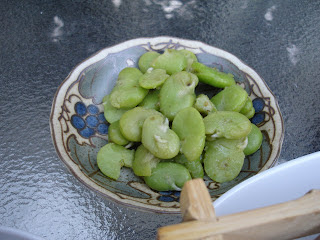 Speaking of LOST- we were lucky enough to have Michael (who's been gone FOREVER!) aka Harold Perrineau visit us on set the other day. He brought along Daniel Dae Kim (Jin) so we were extra thrilled!!! 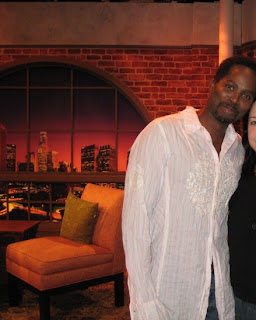 Me and "Michael" with me cut out. 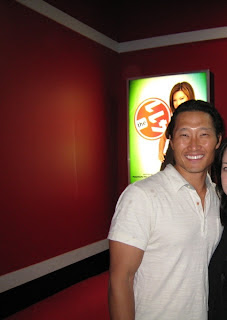 Me with "Jin," who I congratulated (remember, he and Sun are having a baby!)

We also did a food segment, and Bob Blumer, aka The Surreal Gourmet, was kind enough to come and show us how to whip up the most charming dishes for any party. As a food blogger, I was thrilled to have him and the food was delicious. 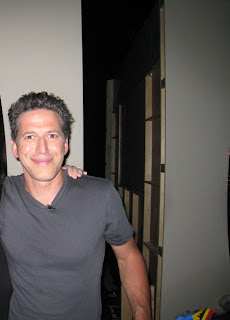 Me and the Surreal Gourmet

So I guess this isn't much of a food post..more like a blubbering fan post. Sometimes variety is the spice of life, no?
Posted by Anne

lol did you ask "michael" if they had any plans to bring him back? magnificent 2 hours of television last night... and i hardly ever watch TV =P

Although Apolo won, the Hapa I was pulling for (Cheryl) did not 3-peat. Mmmm, Cheryl.

Uh, anyways, how is the texture of frozen fava beans? I've only been seeing larger fresh fava beans recently at the farmer's markets, but they are rather mealy.

you met JIN??? he and sun are my favorites on LOST! and i was rooting for apolo, too!

I love that show Surreal Gourmet!

omg, you met michael & jin? how abso-effin-lutely cool! it WAS a good episode--isaac had trouble sleeping the night lost aired b/c it made him so anxious! LOL!

Rameniac: I wish "Michael" would have spilled the beans on everything! I can hardly wait until next season...

Marvin: I have to say, the frozen beans were not as firm as the fresh ones. I think next time I will simply thaw them instead of boiling them as I believe they are already cooked.

Hime: I had seen it a few years back and remembered him cooking out of his trailer. He was a great guest to have and a nice guy.