but cooking for 45? Heart-attack inducing, stress-filled nights featuring dreams of talking lentil beans and buckets of unpeeled garlic smirking at me. Huh? Ok, that doesn't make sense. Let's get on with this post.....

I haven't really cooked yet this week since I was out of town all weekend (and forgot my camera so I couldn't document the mediocre meal I had at Guayma's anyway) and am now solo for a week while my husband is off recording. It's hard to cook for just one, so my dinners will probably consist of canned soup that really needs to be eaten already (does it ever go bad?) and tuna fish sandwiches. Even though I'm sure you're all heartbroken that you'll be missing out on commentary and photos of those two exciting foods, I've decided to use this week to blog about things I made or foods I ate before I started this blog.

Late last year, I decided to throw my husband a big 'ol birthday party since he'd never really had one since we've been together. We usually just go out to dinner on birthdays, but this time we made a list of invitees and started planning.

I wanted to cook everything (I'm sort of a control freak that way....which sometimes kicks me in the butt!) and just asked people to bring alcohol and chips. It took me a few days to plan the menu, make the shopping list and write out the schedule of when I would do everything. The final menu looked like this:


The birthday bbq party was scheduled on Saturday so I started the prep on Tuesday. I'd go to work, come home and scarf down dinner, and then start the chopping, mixing, storing, etc. By Thursday night I was exhausted, and by Friday I was downright mad.....at myself, of course! Why didn't I just stick to making a few main things and let people bring their favorite potluck dishes? I guess part of the reason is because most of my husband's friends are musicians. Not to stereotype, but musician's aren't usually known for their cooking since being on the road means eating out all the time. You get the idea. Anyway, between the vegan needs of about 20% of the guests and trying to make everything myself, I was exhausted.

How'd it all come out? Pretty great, actually. We had so many people show up that our backyard and house were practically popping at the seams. The food was a big hit- especially with the vegan crowd- since I suspect that many of them live on nuts and twigs (c'mon, I can joke, can't I?). The only thing that didn't really turn out for me was the Neapolitan cupcakes- they looked so adorable on Nic's fabulous blog but mine didn't come out so whimsical. They tasted fine, but I was disappointed that they layers weren't visible. I also have to thank Nic and Alton Brown for the Chocolate Silk Pie recipe- the vegans and non-vegans ate it like it was the last thing on earth.

I have to say, all of the work was TOTALLY worth it in the end. Seeing people scarf down your food with big smiles on their faces is one of the best things ever.....besides the leftovers, of course;). 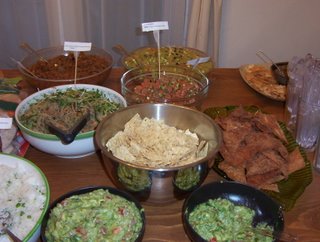 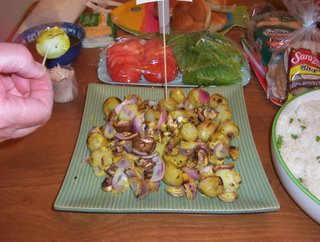 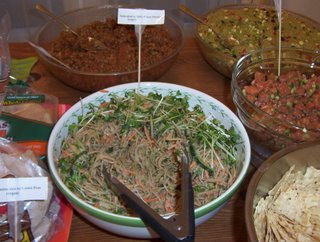 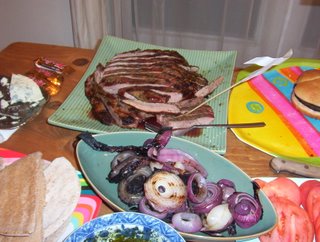 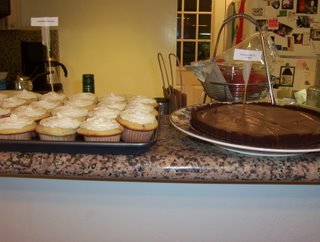 hi, i'm speechless with amazement...your husband is one lucky man - what a labour of love; everything looks fabulous!

Wow....what work...how wonderful and where do you get the time and energy? No help? You're amazing.Everything looks great.

hi tokyoastrogirl, the food looks awesome. it's a lot of fun planning for dinner parties.