(this lost post just magically appeared again, so here it is!)

As most of you probably are not aware, I work in the TV business. I love my job but do daydream about being able to one day combine my career with my love of food/cooking. Don't get me wrong- I have absolutely no desire to ever be on the air. In fact, I hate being on the air in any shape or form. When we rehearse certain live shows, I often get asked to stand in for talent while the camera guys and audio techs check the setup- even that makes me uneasy. Seeing myself on the monitor while pretending to talk about red carpet fashion just makes me cringe....and I'm not even on the air! I don't know what it is, but I've just never been one of those people who likes to see themselves on TV. It makes me shudder just thinking about it.

I do, however, have a great desire to control things (ask poor J) and seem to thrive in situations where I can plan things and execute them. Producing a food show would be a dream come true, and I got a little taste of that yesterday. The show that I work on covers what's on television on any given week, and one of yesterday's segments focused on NBC's "Celebrity Cooking Showdown." We booked a satellite interview with Wolfgang Puck and Cindy Margolis but wanted to pair that with something in-studio. We decided to stage our own cooking showdown between our two hosts, D and J (not my husband, but another J) but do a sushi showdown since it wouldn't require any burners. I was excited to help coordinate the segment and got to work.

I knew that there was a new sushi place near my house called Mia Sushi in Eagle Rock so I called them to try and book our "expert guest," a sushi chef. Not only were they enthusiastic about the idea but they also agreed to supply all of the ingredients necessary to stage the contest. That night I went home and washed the three yukatas (summer cotton kimonos) that I have- I wanted to make D and J wear them during the segment.

The next day, the sushi restaurant owner Rudy and the sushi chef, Kazu, showed up with a truckload of supplies. Mounds of spicy tuna, perfectly julienned cucumbers, wispy sprigs of kaiware (daikon sprouts), deep red maguro, flaky piles of imitation crab and enough small dishes, knives and accesories to house a Sur La Table. Ok, maybe I'm exaggerating but I started to worry that they would be disappointed that they segment would only last 3 minutes! Kazu-san got to work setting up our table and 30 minutes later, it looked like our own, on-set sushi bar.

Although Kazu was nervous, he did a fantastic job. First, we had him demonstrate how to properly make a cut roll, then had him whip out a stopwatch and say "Ready, Set, ROLL!" Our two hosts were off and running and Kazu stood there making little comments here and there about their maki-rolling prowess. In the end, both rolls looked pretty messed up but D's was the clear winner, while J's barely stayed together after he tried in vain to slice it before securing the roll. 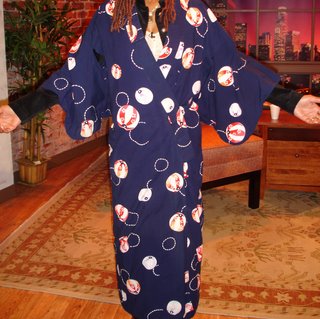 Our host, D, wearing the yukata that my Obaachan made! 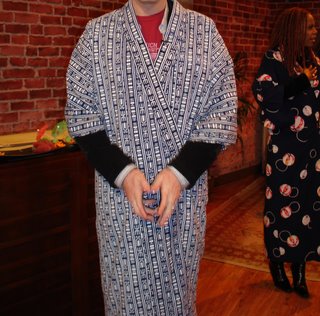 Our host, J, wearing the yukata that my dad gave my husband 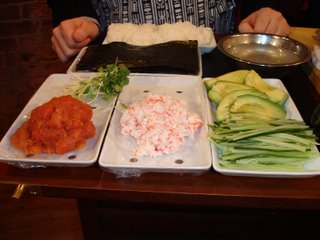 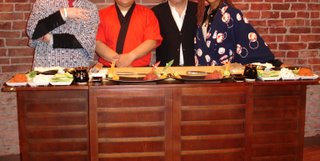 Ready to start the segment

So, I guess I kind of fulfilled a mini fantasy of coordinating a food show.....well, at least a food segment. I think it was great because the sushi chef was just himself- he was so nervous at the beginning but ended up being the star of the show. I hope that with the rising popularity of cooking shows (most of them, including the Celebrity Cooking Challenge are just awful) I'll get more chances to participate in food segments on our own little show.
Posted by Anne

i love the fabric on the yukata your obachan made, it's one of my favourite patterns.

sounds like you had a blast--i hope they give you more opportunities to stage another cooking challenge.

What fun!!!! You certainly sounded as though you were in your element!!!! Much luck with further endeavors!!!!!!

Just dropping in - saw your post on Chowhound and the fact that no one had replied. That sucks. The international board is really good and has a bunch of foodies always on patrol, but it's mainly Euro-centric.

I wish I could help you with your Tokyo requests; the only suggestion I can give you is that for koroke, head to the basement of the department stores if you want it cheap. But I'm sure you knew that. If you ever get to Taipei I know a good koroke place there...

Have a good trip!