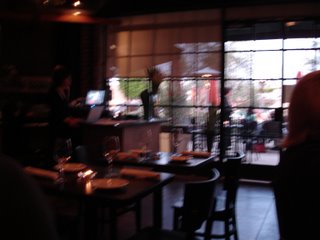 While perusing the internet a couple months back, my husband stumbled upon news of a new restaurant opening in South Pasadena. He told me that it was scheduled to open in April and we were both excited at the prospect of a new, "nice" dining place so close to our house. 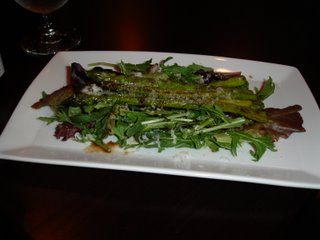 Mike & Anne's Restaurant opened this past Monday, so we decided to give it a try after strolling around the Thursday Farmer's Market and buying waaaay too many grapefruit. We walked in at around 7:00 pm and a few tables were occupied in the airy, modern and well-lit place. We were seated promptly and given the menu. We had checked the menu online and were disappointed to see that the current menu is about 50% smaller although I'm sure they plan to increase the number of items soon. 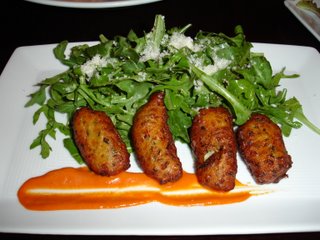 We decided to start with the Zucchini Parmesan Fritters. My husband ordered the Vegetable Cassoulet with Grilled Ciabatta as his main while I chose to have two starters- the Grilled Asparagus w/ Manchego, Black Pepper, Sherry Honey Vinaigrette and the Grilled Bratwurst w/ Mustard & Red Cabbage. Our very nice waitress opened the Cotes-Du-Ventoux which we purchased at Nicole's earlier. The restaurant does have a small wine list and charges $10 corkage, although they have a Monday-Tuesday special of free corkage on any wine purchased at Mission Wines, right down the street. 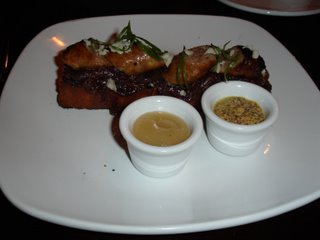 We sat back and awaited our appetizer while trying to see what other people were eating. The portions looked generous and we were excited for our meal. We were given a small bread plate with three slices of nice French bread and creamy unsalted butter. Shortly thereafter, a different waitress came up with three plates saying "vegetable cassoulet?" I told her that we had ordered the fritters to start and she just looked confused. I told her again so she took everything back into the kitchen and started talking to the chef. After a minute or so, she came back with the same three dishes (our mains) so I once again asked about the appetizers. Finally, our waitress came over and apologized about forgetting to put the order in for the fritters but that they would be brought out soon. 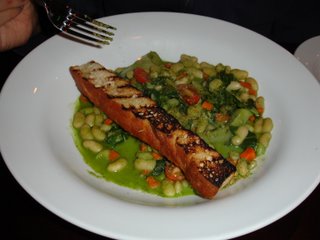 Our dishes looked very nice, and we dug in. The cassoulet was well-flavored although the portion seemed small for a main dish- we looked around to see other customers noshing on very large portions of the pork chops and John Dory. Anyway, my bratwurst came cut into 4 pieces and resting on a long, narrow and thick piece of grilled ciabatta which was topped with the braised red cabbage. It looked nice, but it just didn't really work. The bread was rock solid and difficult to cut and chew. The bratwurst was fine and the accompanying mustard and apple puree were nice but I guess when someone orders a bratwurst, you expect a nice hulking link of sausage (stop laughing) -not an unstable, arty presentation of one. My grilled asparagus was again, fine, although there was only a fine sprinkling of grated manchego and the vinaigrette was overly sweet. We got the fritters which were deceivingly golden brown since they provided no crunch at all and had the texture of clouds, which usually wouldn't be a bad thing but aren't fritters supposed to be crispy on the outside? We finished off the meal with their cheese plate which I thought was excellent- the St, Augur Bleu, Garlic Black Pepper, Aged Gouda served with Fig Jam , Micro Arrugula and Chestnut Honey were all delicious. 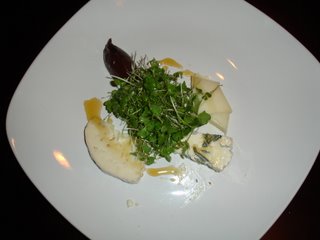 Although it wasn't the best dining experience, I have to say that I can't be too hard on a place that just opened a few days ago. The service was sincere and they even comp'd the fritters since they came at the end of the meal. I think we will give it a month and try again- hopefully it will turn into a great neighborhood restaurant. 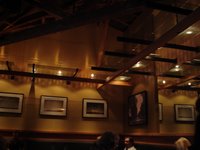 Thanks for the review! I live a few blocks away from this restaurant and have been checking up on it for the past few months excited about trying it as well. The menu looks great but it's always good to have the opinion of someone who has actually eaten there. I'll make sure to order the larger sized pork chop!

Hi from another South Pas resident.

We visited for lunch in June and it was outstanding (chicken salad, burger, and sweet potato fries). We're trying for dinner tonight. Will let you know if it's improved.