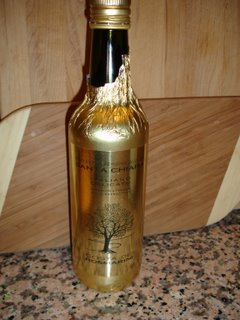 Good olive oil....but we'll get to this later

With the weather being so cool lately (I know, I know- it isn't so bad LA girl!)I thought I'd bake something for my coworkers. I'd bake it for myself but the chances of my husband and I spending the better part of our waking hours eating all of it prevents me from keeping an entire cake in the house. I had found a recipe for a berry cake on a blog and didn't really pay much attention to the actual recipe since I was completely smitten by the lovely photo that accompanied it. I printed it out and knew I'd found the sweet treat that would take shape in my kitchen the following weekend.

I was talking to my best friend on the phone as I gathered the ingredients so I wasn't paying too much attention to the fact that the cake started with 3 sticks of butter. And yes, I said started with.....and continued with the addition of a block of cream cheese and six eggs. By this time I was off the call and my mind really started to focus in on the 3 cups of sugar (yeeps!) that followed , I thought, "What am I making? " See what happens when you fail to show the proper reverence demanded by baking? Not wanting to waste the truckload of ingredients already in the bowl (and, admittedly, curious about what this butter-laden cake might taste like!) I continued. After all was said and done, the batter came almost to the top of my 9-inch springform pan. I topped it with the berries and crumble and heaved it into my oven.

An hour later, the cake still wiggled tremendously so I kept it in for another 20 minutes. I checked again, and it still moved like a water balloon. I went through this routine a couple more times until the total baking time was over two hours at which point it finally seemed set. The entire house smelled like a bowl of vanilla buttercream and I set the nearly 5 pound cake (I'm guesstimating!) on the table to cool a bit before unmolding. After 20 minutes, I clicked the hinge on my springform and prepared to see the entire cake in it's naked beauty when.....nothing. The sides of the pan did not move. I pulled on both sides with all my strength- NOTHING! My husband put forth a mighty effort but the thing refused to move even a millimeter. I finally reached into our tool drawer and used two pairs of pliers (what is this, American Chopper?) to get a good grip on each side, all to no avail. My springform had failed me for the first time and was ready to retire, apparently. Too bad it didn't tell me before I poured a gallon of batter into it.

I let the cake cool a bit more and decided to simply flip the cake onto a plate upside down, then invert back onto another platter. It worked, thank goodness. The crumble even managed to stay on. 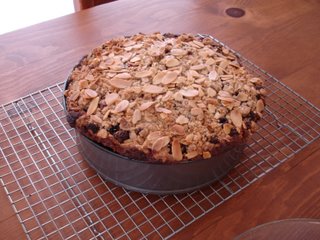 I don't WANT to come OUT! Leave ME!

So, how was the cake? The sides of it had turned quite dark due to the long baking time and high butter/sugar content, but the inside was a golden yellow. Slicing through it felt like cutting through a massive chunk of fudge- the density was incredible. I must admit, it tasted more like sweet butter than any pound cake I'd ever eaten. I allowed myself a very, very thin slice (which probably contained the a day's worth of calories) before doling it out to my coworkers, who were delighted. That said, I don't think I'll ever be making this cake again. I'm no health nut, but it's almost....morally reprehensible to make a cake of that buttertude. Actually, I just don't feel like baking anything that requires two hours in the oven and a virtual grocery store's worth of ingredients ever again. 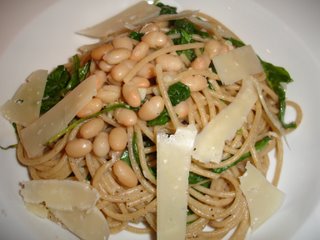 Onto dinner last night. I'd been dreaming of a white bean and arugula combination of some sort and put together this simple dish. Whole wheat pasta with garlic, arugula, white beans and parmesan. Drizzled with a bit of extra virgin olive oil, it was a nice combination of nutty flavors and I realized how much I love creamy white beans. If any of you have a great recipe for escarole & white bean soup, please pass it my way! 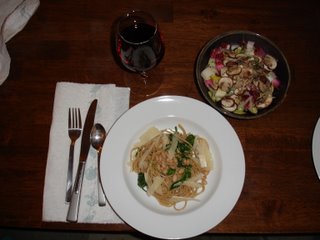 Quite a refreshing change of pace from the Granddaddy Butter Cake- my affectionate nickname for the big lug.

That cake sounds amazing(ly frightening), but the most memorable part of the entry for me was...

Oh my god, I want to use that word every day.