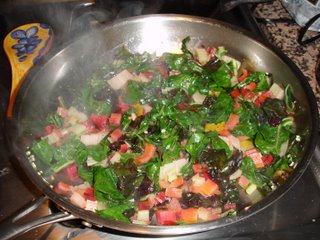 A few days ago I reported that I had brought home a bounty of fresh produce from the local farmer's market. One of the most beautiful and interesting items was the bunch of rainbow chard that were as bright as Jakob Dylan's eyes. I had to bring such beauty home....but I had never prepared chard before. I did have experience in mustard greens and kale, so I wasn't too timid but I wanted to make sure I cooked it in a way that fully presented it's natural, vibrant nature. 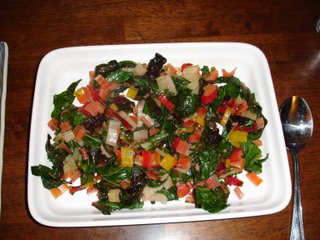 After searching on several sites, I came across a simple recipe on Epicurious which looked good and had gotten positive feedback. It made sense to me that the tougher stalks and ribs were to be boiled for 5-10 minutes before sautéing it with the leaves. A big bunch of kale or chard can look intimidating with their thick, strong build and I must admit, I sometimes shy away from making greens for fear that they will be bitter. Not so, my friends. I'm sure the main reason the chard was so tender and sweet was the fact that I bought them at the Farmer's Market instead of some huge, neon-lit grocery store. This preparation, however, really enhanced the natural flavors and let the taste and texture of the vegetable shine through. The added bonus of it's gorgeous appearance doesn't hurt either! I think this will be making frequent appearances at our dinner table from now on.

I needed to use up leftover potatoes so I made cod & potato croquettes. I love croquettes of any form and it's such an easy and versatile way to get rid of leftovers. I poached some thawed cod in water, salt, bay leaves and pink peppercorns before flaking it and adding it to the mashed potatoes, parsley, garlic, egg and breadcrumbs. After a few minutes in about 1/8 inch of canola oil, they were golden and crisp. 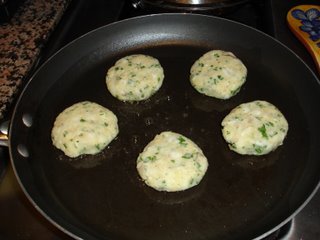 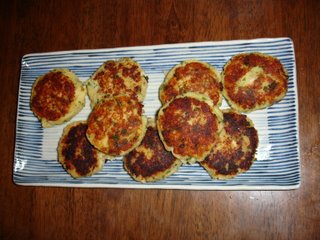 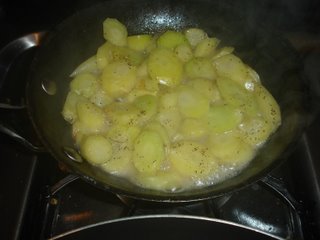 White carrots were another interesting item I picked up at the market. After adding a bit of butter to a pan, I threw in the carrots, 1/4 cup of water, salt and pepper and shut the lid for 5 minutes under a low heat. They had a much more subtle carrot taste than their orange counterpart and the sweetness matched well with the spiciness of black pepper. 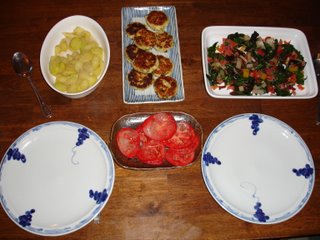 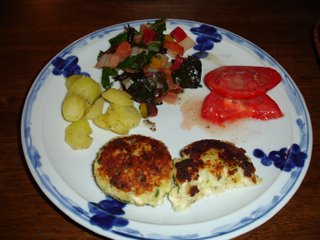 Why can't I remember to take a photo BEFORE taking a bite?

On a side note: After dinner I made some stock with the carcass of my roasted chicken from the other night. I didn't take photos because really- who wants to see a big 'ol pot of lifeless vegetables and chicken bones who have given their life for a nice, rich stock? It doesn't look attractive but the end result is so worth it. Stay tuned for a steaming bowl of chicken soup or some risotto in the near future.....:)

Yummy. That's funny that you mention the post-bite photo. My friends, including parents, know not to touch the food before I have taken photographic evidence.

Isn't that ruby chard beautiful? Definitely the way to go cooking the leaves and stalks different amounts of time.
Swiss chard is really versatile, too. If you make a gratin of the ruby stuff,braised and finished with cheese and breadcrumbs it is so good and also winds up looking like some kind of gorgeous raspberry crumble!

AMAZING!! Everything looks wonderful!!!! I love cooking swiss chard by just steaming then ending with salt, pepper and a bit of rice vinegar!!!! Yummm.. Yours looked so delicious....