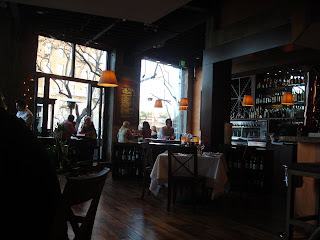 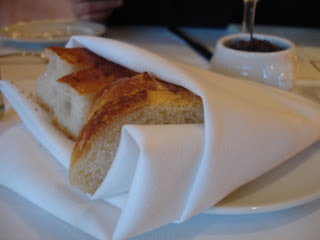 As you know from reading this blog, J and I love to eat out, and do.......a lot. Too much, probably. Ok, defnitely! We have our favorites- Briganti and Bistro K in South Pasadena, Z Sushi in Alhambra, Sushi Gen in Downtown, Parkway Grill in Pasadena, Beaujolais in Eagle Rock, Mozza in Los Angeles.......we go to these places often because we know it's going to be good. As a food blogger, however, I should try new places more often and expand my horizons, but you know how it goes........there are few things more aggravating than spending good money on bad food and bad service. It's not like buying a sweater that doesn't look good when you get home- you can always return it. But seeing as you already consumed the meal, you can't really ask for your money back. And good food is so subjective........it may be crap to you and gourmet to someone else. There's also more of a chance that a new restaurant will be so-so as opposed to mind blowing.....there are just too many mediocre restaurants out there to avoid that.

Well, that wasn't the case when our friend R suggested we try Fraiche this past weekend. We'd been meaning to make plans with him and his girlfriend for awhile, and, being fellow food maniacs, we knew we'd hit it off and we did. We rarely venture out to the Westside to eat but was excited at the prospect of trying a new place that I'd already heard some good buzz about.

We arrived to find a large, open space with floor-to-ceiling windows and high ceilings. The tables were nice and set apart from each other- this is not a place where you'll rub elbows with your neighboring diners. I loved that, even though they could have placed at least 50% more tables in the restaurant, they chose not to and give the patrons some privacy and space. The place was well-lit from the natural light coming through and the open kitchen was bustling. A great start...........

R was kind enough to bring several terrific wines, and we perused the menu while the waiter told us about the specials. Fraiche is actually divided up into two parts- the restaurant and the bar- with a separate menu from each. You cannot order bar items in the restaurant but both menus do share some items, like the raw oysters. Everything on the menu sounded delicious, and the four of us decided to share the Fruits De Mer Petit Plateau ($50) to start. 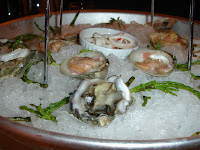 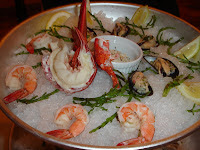 Hm, I'm not sure what part of this platter was petit as a large, two-tiered behemoth of seafood was placed on our table. Oysters, clams, mussels, crab salad, shrimp, calamari salad and lobster sat on a bed of ice and came with aioli, cocktail sauce, mignonette, and horseradish . Every single thing was fresh, meaty, cool and absolutely delicious. Definitely worth the price and could be a nice meal for two. The chef (a friend of R's) then sent out an order of the mussels, which is on the bar menu only and usually prohibited from being ordered in the restaurant. I guess since we didn't technically order them, it was ok, and once I popped one in my mouth, I understood why the chef chose this dish to have us try. I'm sure you're thinking "Moules Frites? What's the big deal?" but these mussels were big, meaty and just so amazingly fresh and tasty- I can say they were the best mussels I'd ever had in my life. There- I said it. Each mussel was the size of Texas, or so it seemed, put full of the flavors of the sea. One of the favorites of the night for me. 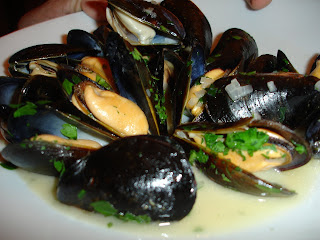 I asked R if he thought we should still order appetizers AND entrees, and he replied "Yes- I'm feeling indulgent tonight!" OK, I was convinced (doesn't take much, does it?). We each ordered an appetizer and an entree, sat back and waited for the feast to begin. 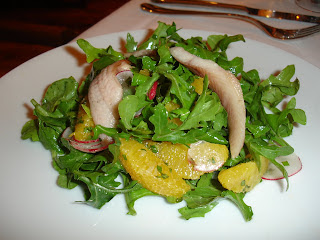 J ordered the Smoked Eel w/ Arugula, Orange, Mint & Breakfast Radish ($11). It was lovely and refreshing, although I felt that the oranges slightly overpowered the subtle eel. Still, everything was fresh and lightly dressed- he liked it but would have liked a bit more eel. 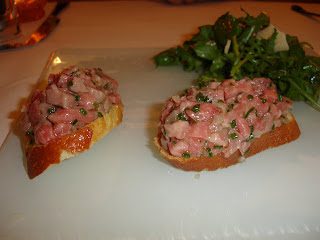 R got the Beef Tartare with Bacon Sabayon, Chives and Arugula ($13)- wow. We agreed it was the best beef tartare we'd ever had (I know I said that about the mussels but I'm serious about both). The beef was chopped into cubes so you really got the texture and flavor of the meat, while the bacon sabayon added a nice saltiness and smokiness which was very distinctive but didn't overpower. 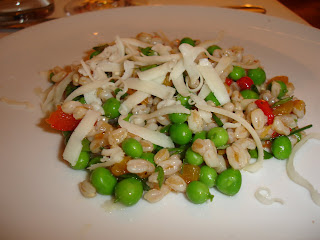 D ordered the Farro Salad with English Peas, Roasted Peppers, Herb Salad and Tuscan Pecorino ($9) - once again, fresh ingredients, great combination of flavors and a simple presentation made for a great first course. I'd definitely order this next time. 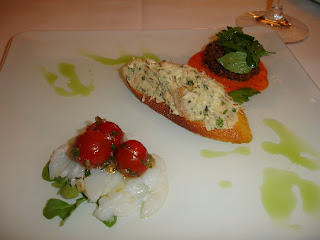 I got the Tre Baccala- Whipped With Yukon Gold Potato, Crispy With Espelette Aioli and Crudo with Sea Beans and Tomato ($13). The crudo was my favorite as I'd never had salt cod served almost sashimi-style. It was pleasantly but not too salty, and the sweet cherry tomatoes were a nice compliment. I also enjoyed crispness of the baccala cake. 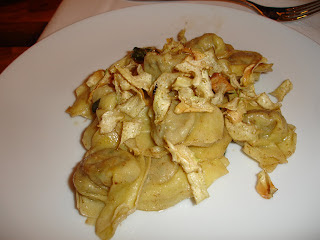 What, we're still eating? You have no idea- we were just getting started! For his main, J got the Tortelli w/ Braised Rabbit, Sage Brown Butter and Artichokes ($13). When I first saw this on the menu, I wanted to order it but then was torn between this and something else. I LOVE handmade tortelli........and I adore braised rabbit. Luckily J said he'd order it, so that freed me up to order the other thing I was eyeing. Well, one bite of this tortelli and I was once again torn- although I loved my dish, this was.......spectacular. The brown butter coated each tortelli in a dry sort of way- no pool of butter here- and the flavor married with the shredded, braised rabbit inside each pocket of pasta in a way that was, well, nothing short of heavenly. I know- I'm gushing, but you have to understand that at this point, I was thinking "How can a restaurant (especially a NEW restaurant) keep hitting the mark dish after dish?!?!" This tortelli was made for me..........or, I was born to eat this tortelli. It's tortelli destiny............ 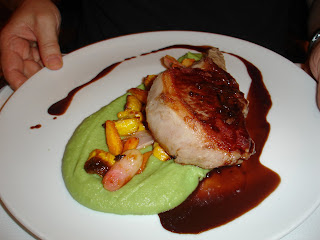 R got the Kurobuta Pork Chop w/ Braised Baby Vegetables, Lemon, Violet Mustard ($23)- a big, honkin' pork chop which actually came on a bed of chive mashed potatoes in addition to the veggies. It was thick, tender and nicely smokey which I wasn't expecting but was really delicious. So many times at restaurants, pork is dry but it wasn't the case here. 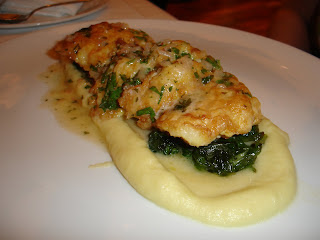 D had another thing I was eyeing- the Monkfish "Francaise" with Spinach, White Wine and Shallots ($22). The butter just added another layer of velvetiness over the tender fish and, again, made for a very lovely dish. I love the meatiness of monkfish and the entree was prepared simply to bring out the flavor of the fresh fish. Another winner. 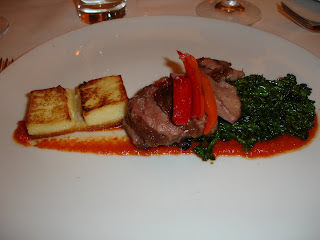 My Roasted Veal Cheek w/ Semolina, Romesco and Pickled Lipstick Peppers was as tender and melt-in-you-mouth as anything could be. See, I have a rule- if I see "cheeks" on a menu, I'm ordering it. Halibut cheeks, yellowtail cheeks, beef cheeks....you get the idea. The meat of the cheek is always SO tender and flavorful, so when I saw Veal Cheeks, it sealed the deal (although yes, I was distracted by that tortelli and the monkfish). I wasn't disappointed. The romesco was spread in a thin layer underneath of meat as not to overtake the wonderful flavor of the veal, and the puffy semolina cakes were subtle and delicious. Yet another winner. 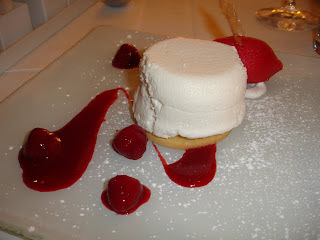 We couldn't leave without ordering dessert, and opted to share two. One was sort of goat cheese mousse with raspberry sauce and fresh raspberries which was divine. We also shared the cookie plate which was fine but nothing really stood out. I often order the cookie plate at a restaurant for the variety but have rarely had one that really impressed. I was pretty floored, however, by the warm madelines that the chef also sent out- wow. That was my kind of cookie plate. 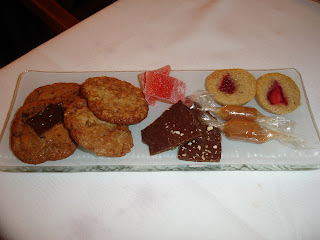 I'll put this out there in the interest of full disclosure. Yes, R is a friend of the chef and they have worked together in the past- this obviously was the reason we got the complimentary mussels and the madelines. However, every single dish was outstanding and I could see all of the dishes coming out of the kitchen looked of the same, stellar quality. J even said to me at one point, "Do you think everything is this good because R is friends with the chef?" I hardly believe that a busy kitchen would even have the time to make one set of dishes one way and all of the others with less effort, and you could see by the busy restaurant that the other patrons were enjoying their meals.

As you can tell, I loved Fraiche and am looking forward to having many meals there. In a city where restaurants open with tons of hype, then disappear after a few months since that hype wasn't based on anything tangible, it's great to see a place that puts its food where its hype is. Los Angeles could use more Fraiches, that's for sure. 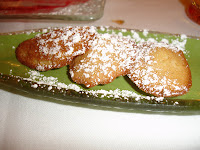 I'm glad you enjoyed the food at Fraiche...I went last weekend and unfortunately the food was pretty average. The white gazpacho was ok but the rigatoni with lamb bolognese was very salty. It seems though that the menu changes frequently so I will give it another go since its such a nice location.

wow this all looks really good. especially the moules frites! i've been hunting for a good version of that ever since i went to paris a long time ago. must... investigate!

Ooh, fraiche sounds good. will have to try it. My bf and I went to bistro K per your recommendation and we loved it. luckily we went one last time before the chef sold the restaurant last month. can't wait to go to the downtown restaurant when it opens again. hanna

I loved it as well. I've been there four times already, and can't get enough! I was there last night, and there is a new bar chef who makes cocktails from fresh fruits and herbs. The mojito is strong!!!! This place will put Culver City on the culinary map.

I love this place...and then again...I am friends with the co-owner as I am one of his fiance's bride's maids...LOL.

I took my boyfriend (King Food Snob)there for his birthday and he was pretty impressed with the food. We kept ordering and eating too. Such great prices for the amount of food you get and the wine list is pretty awesome. My bf had the cod and I had the Steak frite. We also had the Oysters.....YUM! I'm recommending this place to everyone.